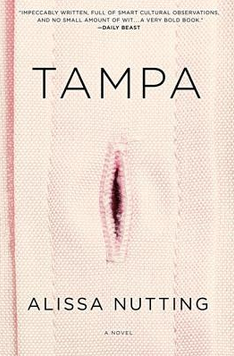 I've wanted to read this book for a while, but have been wary about it because the main character and first-person narrator, Celeste, is a teacher with a ravenous sexual obsession over 14 year old boys. It's not exactly the usual book I read, nor does it sound like particularly pleasant reading material, but sometimes you've got to move out of your comfort zone - even if just thinking about it makes me feel a bit ill. Yet despite my distaste for the plot, I have to confess I was intrigued by this novel, mostly because someone actually wrote a book about a teacher seducing a male pupil, and from the perspective of a teacher who intends to do it. I tentatively read an excerpt a little while ago and, despite being thrown in at the deep end (Nutting does not hold back), I was hooked by it, and had to see where this was going. I was a bit concerned that I might become sympathetic to Celeste, like I have done in the past towards other morally-reprehensible characters: Joe, from You by Caroline Kepnes, stalks his victim and goes to extreme, violent measures in his pursuit of her, yet because he rationalised his actions to me, I more readily accepted them. Similarly, Alex of A Clockwork Orange by Anthony Burgess recounted his most violent crimes in a slang of his own creation, lessening the impact of what he had done until it was too late and you were on his side. In much the same way, I feared Celeste would win me over.

No such thing occurred, because she is not a character you can have much sympathy for: Celeste is a cold, calculating predator, a blonde beauty on the outside but rotten to the core. I'll tell you early on, so you can duck out if you want to: this is not a woman who fights against her feelings, but wholeheartedly embraces, encourages and indulges them. She does not rage against her unnatural urges, or feel conflicted about what she does: she lives for it, even explaining early on that she had become a teacher specifically to be around her preferred age-range.

When we first meet her, Celeste is preparing for her first day as a qualified teacher to middle-school children, and she is eagerly anticipating picking her victim. She quickly establishes that she has a 'type': youthfully androgynous, but obviously male; not too confident (he might boast to friends) and secretive, potentially with negligent parents to make getting to him easier. She is a vampire, from her glamorous appearance and predatory nature, right down to her insatiable appetite for virginal flesh, and she is despicable. The true edge of the novel, however, comes in the form of Jack, Celeste's fourteen-year-old victim. It's easy, in a world of Augustus's and Edwards, to give teenage boys a maturity they don't actually have - admittedly, the love interests of The Fault in Our Stars and Twilight are slightly older than Jack, but the point still stands that these are teenage boys, credited with more wisdom and worldliness than many of their real-life contemporaries would have. Nutting's Jack is portrayed exactly as he should be: childlike, innocent, young. If Celeste's tastes had run towards the older-looking, more confident boys she dismisses for being exactly that (she finds any male even slightly resembling adulthood repulsive), then we'd be treading a dangerous line between titillation and violation: instead, we're firmly placed in the violation camp. By keeping Jack deliberately young, from his skinny legs to his too-long fringe, we're constantly reminded that this isn't some extended teacher-pupil fantasy scene: this is abuse.

Celeste is a very interesting character: she recognises that others would view her as a pervert, but refers to her proclivities as 'a preference', like there's no real reason for anyone to think badly of her just because she 'prefers' something different. It's a mind-boggling way to think about such a thing, and yet the fact that Nutting is able to create a character like this is testament to the quality of her writing: whilst Celeste regularly disgusts, she also fascinates with her outlook on her actions. The way she rationalises her actions, the brazen manner in which she reveals her fantasies, and the matter-of-fact way she plans to ensnare Jack are the kind of car-crash reading I don't come across often: I was revolted and utterly hooked. She also has a dry sense of humour that throws you off guard: you don't expect a monster to be able to make jokes, and laughter is, after all the great unifier - so it's uncomfortable and terrifying that by making you laugh Celeste can (even for a second) make you forget what she really is. As she sinks deeper into her depravity and becomes careless in her indulgences, the novel becomes less about her obsession with Jack and more about her cold, inhuman attitude to those around her, and the lengths that she will go to in order to conceal her secret, giving the novel far more depth beyond its original subject matter.

It feels weird to say I enjoyed reading this book, but the truth is, I did, in a malicious way: from page one I found myself rooting for someone to identify Celeste for what she is and call her out on it, so she could be punished. I had similar feelings about her as I did Amy Dunne when I read Gone Girl  - I was horrified by Amy's actions and reasons for them but also admired her in a perverse way for her determination and ingenuity. I can't say I admire Celeste, but I certainly recognise those qualities in her: she is nothing if not scheming. I suppose I would say that, if you've got a strong constitution when it comes to subjects that make you feel a bit ill, and enjoy reading about a psychopath being, well, psychopathic, then this would definitely be up your street. Nutting has created a deliciously wicked, depraved character who is as enthralling as she is disgusting: you'll not find an anti-hero here to root for, but you will be feverishly turning those pages to discover if Celeste's crimes finally catch up with her. It does lose pace towards the end, which is disappointing, but not so much as to diminish the rest of the novel. I suppose I'm going to lean on the recommend side because the bottom line is - Tampa has a lot of bad things in it, a lot that will make you uncomfortable, but is ultimately a very good book.

So to summarise with my new feature....


REVIEW IN A GIF