REVIEW: The Girl On The Train by Paula Hawkins 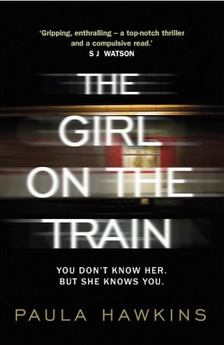 Title: The Girl On The Train
Author: Paula Hawkins
First Published: January 2015
Published By: Transworld
Rating: 5/5
Review Summary: Something Is Not Right Here


When I bought this about a week and a half ago (with an unexpected windfall courtesy of a backlog of void-day train refunds, coincidentally), the bookseller putting the sale through enthusiastically informed me that they'd just received a review that described The Girl On The Train as “a mix between Hitchcock and Gone Girl.” “There’s even birds on the back cover!” she quipped (albeit truthfully). I smiled and said I liked Hitchcock films (who doesn’t?) and Gone Girl (who doesn’t?), so this book should suit me fine, but in my head I was thinking, ‘Great, here we go…’ The truth is, I don’t really like reading – or hearing – reviews of books before I’ve read the books themselves: I’ll happily sit down and plough through them after I’ve finished to see if my ideas correlate with anyone else’s, but I don’t like my opinion being clouded by theirs beforehand. As soon as that good-natured bookseller told me that quote, I was immediately thinking exactly what everyone else is now thinking about this book: it’s Rear Window, with a really messed-up relationship thrown in for good measure. Sorry for the spoiler, guys, but if it got spoiled for me, then I’m spoiling it for you.

Except I’m not really spoiling it, because that comparison, whilst a legitimate one to make, barely scratches the surface of this novel: there’s so much more to it than just witnessing things you shouldn’t have. I’m going to have to keep this review short (don’t cheer!) because I want to avoid giving away as little as possible, but there will be a few things I’ll have to tell you, so bear with me.

The novel begins with Rachel, our main character, commuting into London on the same train every morning, which always stops at the same signalling point for a little while, opposite a row of houses that back onto the tracks. One of these houses is the home of Jess and Jason, a couple who are frequently seen out on their roof terrace in the mornings, enjoying breakfast, chatting about the day to come and generally revelling in their love and life. At least, that’s how Rachel sees it: she doesn’t know them, of course, and their names aren’t Jess and Jason, but she looks out for them every day, envying their lives, wishing she had what they have – until one day, she sees something on that roof terrace that changes everything, leading her to interfere in their lives. It’s not as straightforward as that, though, because Rachel – and this is the other thing I need to tell you – has a drinking problem, which makes her a very unreliable narrator. Now, I love an unreliable narrator, but with Rachel it’s not just a case of ‘what is she not telling us?’; it’s also, ‘Does she even know what she saw?’. It certainly puts a different spin on things, not knowing if your only source is A) telling you everything or B) knows what she's talking about.

This is not a fast-paced novel – at least, not for a lot of it. A good chunk is spent establishing just how unreliable Rachel is, and the changes her drinking habits have wrought on her life (incidentally, it sounds like a lot of people don't like Rachel, and I can understand that. To me though, she cuts a rather pathetic character, one who deserves pity rather than censure). The slow-burn works here, however; there’s a sense of dread throughout the novel that grows as it progresses, and the overwhelming feeling I had whilst reading this book was ‘there is something not right here.’ Admittedly I did find it a bit jarring – and disappointing – that first time I turned the page and realised this was one of those multiple-viewpoint books with alternating chapters between characters: there’s been a lot of those lately and whilst they do allow many facets of a story to be covered, I do sometimes get a bit bored with them. Hawkins, however, uses this as a plot device as well as one for storytelling (much like Gillian Flynn does in Dark Places), with flashbacks told from one point of view, and the current story from another… but I've already said too much! What I mean is, the pace might not be as rapid as you might expect, and the switching between characters might make it feel slowed down but trust me, it benefits from that.

I was really excited to read this book, mostly because my commute involves a train that overlooks houses at various points, and like Rachel, I sometimes wonder is was happening behind the net curtains I pass every day. Once, when the train paused at a signal – much like Rachel’s trains – I saw a woman walking her dog through a field, all alone, and out of nowhere I  thought, ‘What if she was attacked, right now – and I was the only person who witnessed it? I couldn’t do anything about it because I’d be moving again before I could get any help!’ The sudden shot of fear I felt as soon as I thought that was surprisingly thrilling, so when I found out someone had written a book that played exactly on that circumstance – well, it was a no-brainer that I would have to read it. Thankfully, though, The Girl On The Train is not nearly as straightforward as my imagined scenario, making for a fantastically twisty, turny novel that only stumbles slightly at the end.