I've not done this before - listed all the books I disliked the most from the past twelve months. But, now I've got my Reading Log, it's that much easier for me to remember those books that really disappointed, annoyed or bored. So here they are: the books I least enjoyed in 2014. I've actually been really lucky this year in that there have been very few books I've actively disliked or been really disappointed by - I was trying to aim for ten, for symmetry with the Best Of list, but on reflection some of the titles I'd selected were actually just filler, and I wasn't so bothered by them that they merited inclusion. So here are the eight titles I liked the least in 2014.  Similar rules to the Best Of list apply - all books listed have been read by me FOR THE FIRST TIME in 2014, but weren't necessarily published in 2014. A few extra caveats here, though - firstly, I have to have finished it.

Murder on the Orient Express by Agatha Christie - first published 1934 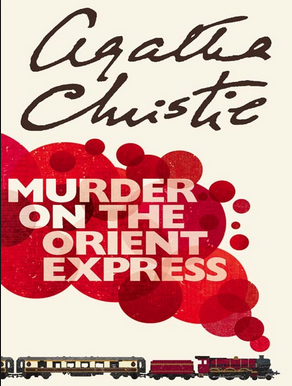 Bit of a controversial place to start: for starters, Christie featured in my 2014: Best of the Year list, and Murder on the Orient Express is one of her most well-known, best-loved stories. This may well be why I didn't get on with it: when a title's reputation precedes it, expectations are naturally going to be higher (expect quite a few of those kind of books on this list). Easily one of the bigger disappointments this year, Christie's tale of Hercule Poirot investigating a murder on a stranded train is infamous, and yet it didn't do anything for me. I don't want to go into it too much because (despite my antipathy) I don't want to give it away, but a lot of the story felt quite contrived, and I thought the ending was a bit of a cop-out. Others may - and probably will - disagree with me, but it fell short of the standard I had come to expect from Christie. It may well be that I saturated myself - I read nine Christie books last year, most of which featured Poirot - but I felt deflated when I finished this one. Not the worst book I read last year by far, or indeed the worst Christie, but possibly the starting point of my increasing dislike for Poirot as a character (still just finished another, though. Christie has become my crack).

I've no idea why I started reading this. It's never been something I've wanted to read before, and I've not read anything else by Lawrence to make me want to pick up another; I just happened to find it for free download on my ereader, so I got it, and I'm so glad I didn't pay any money for it. I just don't get it. I mean, yes, I do - I get the whole commentary on the unnatural divides in society, the reawakening of a woman's sexuality, the question of what love actually is - but the actual story? Nope. I got bored with the endless shagging, I got bored with the supposedly-titillating instances when Mellors lapses into his 'real' accent, and I got bored with their romance. I just didn't connect with it: I know that Connie was filling the gap (ha!) her impotent, paralysed husband left with a solid, strong, dominant man, and was in part obeying his suggestion to provide an heir by any means, but the whole relationship - whether it was about love, or power, or sex, or whatever - just wasn't convincing. I struggled gamely on in the hope of finding something to actually care about, but, to be honest, I spent most of the time reading it just feeling actually quite angry and bored with it all.

This is going to be another controversial one, isn't it? We Were Liars was one of the YA books of 2014: thousands of people of all ages appear to have been captivated by the story of the messed-up, super-wealthy Sullivan family spending their summers on their private island. Admittedly, there's a lot in this book to think about, and I have to say it's a really well-plotted story: there were some parts of it that I just did not see coming, although in retrospect they made a lot of sense, which is the mark of a good writer, I think. What actually bothered me about this book was the narrator: maybe Lockhart wrote her too well, but I just could not stand her, and as it was written from a first person perspective, I never got to get outside of her head. Again, I'm probably missing a point here, and maybe on a re-read I'll change my mind, but my first impressions were that it was a book full of self-pity with few redeemable characters and not all that much point to it.

This was an unexpected hit of 2013/2014 - Vintage Books released it as part of their Classics series, and suddenly a novel that had faded from modern memory experienced a revival, with many a person on Twitter expressing praise for it alongside the hashtag, #Weareallstonernow. It's this exposure on Twitter that led to me this book - that, and the fact that it sounded like the opposite to Any Human Heart by William Boyd. Instead of Logan Mountstuart's dazzling experiences, undulating careers and celebrity brushes, with William Stoner I'd be getting something more akin to real life: a man who lives a quiet life, doing quiet things, quite often making poor decisions. In many ways, this is the story's appeal: it's far easier to relate to, and therefore - theoretically - more resonant with its readers. Unfortunately, it tipped a little bit too far into 'real life' for me, and instead, I just got bored. I did, however, learn something from this: I learnt that I like books that transport me, that force me to imagine new worlds and experiences. Seeing as Stoner lived in a small world, and had few experiences, there just wasn't enough here for me. To be blunt, I think I missed the point of it.

Yet another controversial entry (I'm sensing a theme), this is a book that everyone seems to be falling over themselves to praise, but I just don't get. This is probably more to do with my expectations of the book, and the mood I was in when I was reading it. See, I thought it was going to be one of those novels that, whilst dealing with some kind of Major Issue or Question, was still light-hearted in tone and left one feeling better once finishing it. I also hoped it would be this, because when I started reading it I was in hospital, and could've done with cheering up. It was not quite what I was expecting (or at least, not to my consideration) and it certainly didn't cheer me up. This may be clouding my judgement, so it may benefit from a re-read. However, my main issue with it was a lack of connection with the main character, Rosemary; simply put, I didn't like her much, and so I didn't like her story. Now, you can have narrators that you don't like, but are still enthralled by - Joe from You by Caroline Kepnes is such a narrator, as is Nick from Gone Girl by Gillian Flynn. Rosemary is, for me, not part of this group, mostly because I found her boring as well as unlikeable. Also - and I think this is a fault with the marketing of the book - it's made pretty clear that there is a BIG TWIST early-ish in the book (they even give a page number). Now, I don't know about you, but I (despite my accidental habit of giving away spoilers) don't like it when people tell me I've got a twist to look out for, so we got off on the wrong foot pretty early, because I was expecting a twist, and when it arrived it just confused me rather than amazed (as I think was the intention). After that, it was just downhill, and whilst I may read it again at some point to give it a fighting chance, my overwhelming impression of it was just disappointment.

The Shock of The Fall by Nathan Filer - published 2013

And again, another book that everyone else loved and I don't get, The Shock of The Fall (a beautiful title, I'll admit) won the Costa Book Award in 2013. Now, don't judge me too harshly for featuring this title in a 'Worst of' list: it's not here because I hated anyone in it, or didn't like the story. In fact, I quite liked the plot (if 'like' is the correct word to use) and I sympathised with the main character (indeed, all the characters). But I didn't love it, I wasn't stirred by it, it didn't make me reconsider anything and it didn't stay with me after finishing it. To tell the truth, I got a bit bored with it. I don't know why this was: I'm inclined to think that, as quite often happens, the hype surrounding it meant my higher-than-usual expectations weren't met. Then again, apparently everyone else thought it was worth the hype, so I guess the problem is with me setting the bar too high. Either way, the main reason this is on the list is not because it was a bad book, or because I didn't like the subject matter, or the people in it: it simply did not resonate with me, and it's hard to be pleased with a book you thought you'd like a lot more than you actually did.

Just What Kind of Mother Are You? by Paula Daly - published 2013

I got handed a free sample of this outside of a tube station one sunny morning; it featured the first three chapters or so of the book, finished on an appropriate cliffhanger and by the end of the day, I'd bought it, thoroughly impressed with what I'd read so far (the plot, by the way, centres around a frazzled mother-of-three, Lisa, forgetting to pick up a friend's daughter after school, who promptly goes missing). Sadly, the strong beginning gave way rather quickly to a soggy middle and a limp finish. It wasn't the characters this time - they were quite good, especially Lisa, who you're sympathetic to from the get-go - but more the plot: what started out as a fairly pacy novel with a twist on the missing-child theme turned into something a bit clunkier with the whodunnit element pretty obvious from a mile off - and this is me talking, who has rarely ever been able to correctly identify the perpetrator in any crime stories I've read or films I've watched. I guessed so early on that I have to admit, I assumed for most of the book that I was (as always) wrong, so when it turned out I was right  - well, the sudden pleasure at getting it right was quickly dampened by the reflection that actually, it was a bit obvious. When a book simultaneously makes you doubt yourself AND disappoints, you know you're not exactly on to a winner.

Under the Dome by Stephen King - published 2009


Any books that you've read recently that you didn't like? Were you told you'd love one, then found you hated it?
Posted by Jasmine to a T