REVIEW: Five Children on the Western Front by Kate Saunders 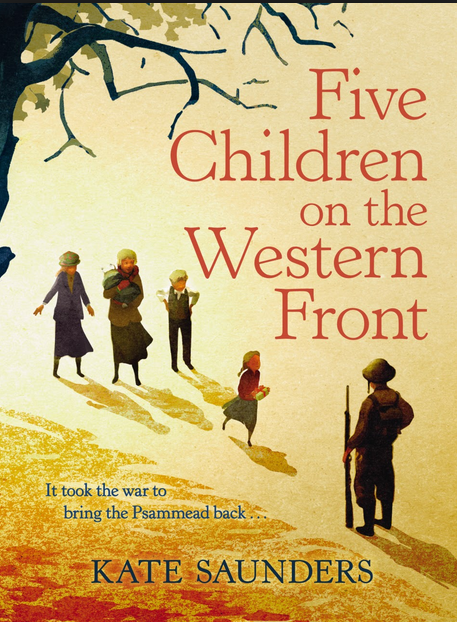 Like so many, I've read Five Children and It, E. Nesbit's charming tale of the adventures the titular five children - Cyril, Anthea, Robert, Jane and The Lamb (the baby) - have with It, a grumpy, vain sand-fairy known as the Psammead (pronounced 'Sammy-ad') that has the power to grant wishes. In the original novel, the children get stuck on church spires, are barred from their own house for being unrecognisably beautiful, and generally abuse their power with absent-minded wishes that (luckily) expire at the end of each day. It's all very pastoral and sweet and exactly the kind of thing one wants from a fairytale. So when I first heard that someone had written a sequel in which the children are grown up and about to live through the First World War, I can't say I was exactly impressed: generally speaking, I'm not a fan of sequels written by people other than the original authors, especially in cases such as this, where the author is long dead - even less so of  'all grown up' sequels. In fact, had this title not just won in the Costa Awards, I probably would not have read it at all - but when an author wins awards for a story using characters created by someone else over a century ago, you have to give credit where it is probably due, and give it a chance.

As is the time-old expectation of any book with magic in it, there are two children of an age at which magic is still a very real possibility: The Lamb, now grown up to the age of nine, and Edie, a little sister of around five who was born after the events of Five Children and It and its other sequels, The Phoenix and the Carpet and The Story of the Amulet. They discover the Psammead has reappeared in the gravel pit of the White House once more, but this time lacking the power to grant wishes for them or himself. The two take him to Anthea - now a grown woman studying art - who, despite being an adult (to whom the Psammead is usually invisible), is able to see him - a telling sign of his waning power. Soon after, all the children - most no longer actually children - are reacquainted with their old friend, though unable to fathom why he has returned, or why he has lost his magic.

There's not enough time to worry about that, though, as Cyril - the eldest - is departing for the Great War to serve on the Front. It's a sombre contrast between the heady, carefree days of on-demand wishes when we previously saw him with the Psammead, and this blend of painful nostalgia and stark, grown-up reality is constant throughout the novel. Eventually, the Psammead regains some of his strength, and also his ability to grant wishes (to which only Edie and The Lamb are usually privy). But instead of the usual whimsical adventures, the two children and the Psammead witness scenes from the his previous life as a desert god - in which he does not come off well - and pay invisible visits to their older siblings embroiled in the war - Anthea and Jane as nurses in England, Cyril and Robert as soldiers in Europe.

Saunders doesn't shy away from the horrors of the war, despite the excellent mimicry of Nesbit's gentle style: there are casualties, fatalities and injuries to endure, but in between times there is still the delightfully cantankerous Psammead to ease the pain - although he now has a story of his own, rather than appearing as the foil for others' adventures. Saunders captures his persona very well, so that the subtle character development of the creature throughout this novel feels natural, rather than the contrived plot it could have appeared as. It's certainly a bold direction to take: part of the delight of the Psammead in previous encounters is that he is irrevocably conceited, reacting with outrage and sulks if he is doubted or criticised. He still maintains his vanity and bad-tempered behaviour in Five Children on the Western Front, but there is a definite lean towards a more civil, repentant sand-fairy as the novel progresses.

The most jarring thing about this novel is Saunder's visions of the children as adults: I never would have pictured Jane as an aspiring doctor, or Robert as a studious man, so in many ways the only connection between Saunders' children and Nesbit's was, for me, actually the Psammead himself, which made it easier for me to enjoy reading it: once I'd gotten over the shock of not getting larger versions of the characters I knew, I was able to separate the children of Nesbit's creation, allowing Five Children on the Western Front to stand on it's own, as it should do. It seems foolish now to expect to recognise the characters as they are in Saunders' tale from the children they were in Nesbit's: after all, I highly doubt anyone who knew me as a ten year old, then saw me as I am now, would be able to connect the two, so why should I know Saunders' Cyril as well as Nesbit's?

Saunders may have used Nesbit's characters for her story, but this doesn't diminish her work in the slightest: if anything, I've found it actually enhances the experience of reading the original stories - something Saunders was no doubt aiming for with her reference to the children's moving visit to their friend the Professor in the future, taken from The Amulet (as Saunders said herself in an interview in The Telegraph, "These little children come back to visit and he knows what has happened to them. Of course they leave him crying"). Peter Pan is the only character no one expects to grow up, after all, and given that we're in the midst of the 100th anniversary of the First World War it now seems almost sensible to acknowledge that some of our best beloved characters from classic children's fiction would've grown up into that tragedy.

As a standalone story, this might not appeal to many: you really need to know about the Psammead and his connection to the children in order to feel the full impact of Saunders' tale, and you won't get much of an explanation of the back story here. But if you've ever read Five Children and It, The Phoenix and the Carpet or The Story of the Amulet then I think you should put aside any preconceived notions of what should and shouldn't be done with other people's creations, and read this. It's an addition to the Psammead canon, not a divergence, and worth the reading just for that.