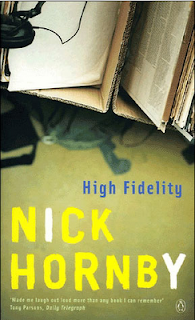 In hindsight, I should have included this in The Disappointments, my entry on authors who had me hook, line and sinker at the first book, but eventually let me down. I read High Fidelity for the first time when I, ahem, 'borrowed' it from a friend of my sister's and just never gave it back (I seem to have a habit of doing that... sorry). Since then, I have read several of Nick Hornby's novels, and none of them have quite lived up to the brilliance and the wittiness of High Fidelity. None of them have been as funny, or as relatable, or even as intelligent as this book. Since the very first read, there has been something about this book that has somehow tugged at my heart in a way that I have not been able to recreate with anything else; it's something in the characters and in the writing that, as far as I am aware, cannot be emulated.

The story centres around a man called Rob, owner of a record store, friend/employer of the 'Musical Moron Twins' and recent victim of a break-up; at the beginning of the novel, his long-term girlfriend, Laura, has seen fit to break up with him for reasons as yet unspecified. What follows is a chronicle of Rob's attempts to understand why he has been rejected yet again, by means of contacting the women from his All-Time, Top Five Ultimate Break-Ups, in order to ascertain why exactly they broke up with him.

The best thing about this book is Rob, who is easily one of my favourite characters of all time; he is, to put it bluntly, a bit of a bastard. He's not a bad man - in fact, he goes into lengthy detail of why he is not a bad man, and why, despite his distinct averageness, he is a good boyfriend. However, he is a bit of a bastard in the general sense of the word; he can be insensitive and selfish, and he makes mistakes that he can't always own up to. But that's the beauty of his character; he's so clueless and exasperating that I always find myself mentally rolling my eyes at him. You kind of want to give him a bit of a shake and tell him to man up, but in a way that won't upset him - despite being a man in his mid-thirties, Rob is very childlike. He justifies actions that aren't really justifiable, he secretly revels in rivals' disappointments and boy, he can sulk. Yet despite all this, you're on his side; not because you want him to be right, but because you want him to be better. Meanwhile, Laura is a character you feel slightly less sympathetic towards; there are two people in this break up, as there always is, but she's the one who instigates it at the beginning of the novel, and it's not until you're well and truly assimilated into Rob's world that it's revealed just why she's broken up with him. However, as a strong woman, you gradually realise - along with Rob - that she's the strength behind this relationship.

The rest of the supporting cast are also brilliant; the Musical Moron Twins - his employees, Dick and Barry - are just as comical and frustrating as Rob. The two are polar opposites of each other; Dick is timid, quiet and unassuming, whilst Barry is arrogant, brash and a bit of a bully, especially towards Dick. However, the two of them are nevertheless united against the rest of the world; these are men who struggle to view the world in any other way except through other people's music. Barry rubbishes any viewpoint on music that doesn't coincide with his own, whilst Dick is defined by his carrier bag that sports the logo of a painfully-fashionable record label. Along with Rob, they are essentially teenage boys trapped in men's bodies (an argument I have sometimes heard made for all men generally). They don't understand women, so they unite against them; they don't know how to discuss genuine, life-changing events - like breaking up with a co-habiting partner, or death - so they compile Top Five Lists. They fight for five minutes - sometimes physically - but moments later, it's forgotten.

Then, of course, there is the style of Hornby's writing; as the story is told from Rob's point of view, we get his way of viewing the world, and it is a hysterical combination of disbelief and confusion. Consequently, there's a slight undercurrent of panic to everything he recounts. It becomes clear throughout the novel that Rob is actually a very unhappy man, and we begin to understand why he is so bitter about the world. Yet at the same time as all this bitterness and cynicism, it's really funny; like Barry, Rob has begun to think in lists, and the entire novel is peppered with Top Fives - top five episodes from Cheers, top five foreign-language movies, top five recording artists, etc. There's just something about the way Rob thinks that translates amazingly well to the page; he's quietly confident sometimes, a good man most of the time and really acerbically witty all the time, but essentially he is weighed down by the same insecurities, fears and flaws as the rest of us. Rob is as a character who isn't just relatable, but believable.

What I enjoy so much about this novel - which is a bit unusual for me - is just how normal it is. There's no big, defines-the-novel climax; everything is careful and measured, interesting enough to hold your attention, but at a slow-enough pace to be representative of what life can be like. It's in the subject matter that the story gains it's appeal; the novel is about one man's love/hate relationship with the entirety of womankind. He doesn't understand them. He's always felt inferior in some way, either to these women, or as a result of a relationship with them. He can't live with them, but he can't live without them. It's a love story, but not a romantic story; Rob's slow-burning realisation of what Laura means to him, and the steps he takes to try to win her back, would not sweep many women off their feet. But this is why I love it; because so far it's the only book I've read which seems to be truly representative of the way men think. I don't know if men who have read this book would agree - I'd very much like to hear your views on it - but, if men are from Mars and women are from Venus, I feel like it's given me an insider's view on just how men work.
Posted by Jasmine to a T