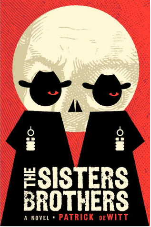 This was an unusual choice for me; I knew it to be set in 1850's America, in the Old West, and as a general rule Westerns have never appealed to me. I think it's because no matter how much you romanticise it, the way in which the West was won was brutal to all - both for the Native Americans who lived there first, and for those first pioneers who struggled to get there, and I've never quite understood why people do romanticise it, considering the truth is so much more interesting. But another reason why I've shied away from such books is that - for me - they are set in a period of time that is too recent, historically. I know, I know, 160-odd years ago is hardly 'recent', but my personal interest in history tends to be a lot further back - I tend to lose interest around the time that politicians start running the world, as opposed to crazy monarchs (so, in British terms, around the Georgian era). All these little things meant that, for a time, I resisted picking this novel up. Yet there was something about the book that just drew me in; every now and then I encounter a book where I feel I should have no interest in it, yet I can't seem to avoid it - in an odd way, I feel like the book is following me. Eventually, I just went for it, and what followed was something completely at odds with anything I had anticipated.

The story centres around two notorious brothers, Charlie and Eli Sisters, who have been contracted to hunt down a gold prospector by their menacing employer, the Commodore. The two set off from Oregon City, where they are based, to San Francisco, where another employee of the Commodore - a scout called Morris - will be waiting to assist them on further details. However, things are - as always - not as simple as they seem. The novel is narrated from Eli's point of view, and straight off the bat you are aware that there is a noticeable difference between the two brothers; Eli seems gentler and quieter than his brother, and appears younger too - a sulk about a horse is particular evidence of this. Charlie, meanwhile, is more ruthless, wily and suited to this career path the two brothers have started down.

Because I was anticipating something entirely different, I was somewhat blindsided by the content. Now I think about it, I'm not entirely sure what I was expecting; more confrontations with Native Americans, I guess, and more shoot-outs in saloons. And there actually is all of that; but it's told in such a way that, what have become clichéd staples of the 'Old West' culture, become all at once unremarkable and almost normal. There's even a duel in the street, and yet even this becomes something of a non-event; you're paying more attention to the brothers' and their interaction with the other members of the onlooking crowd, than you do the life-or-death situation they're watching.


The brothers are difficult to understand; throughout the novel, you are reminded several times of the formidable reputation these two men have, and yet, because you have seen them in their more vulnerable moments, you cannot reconcile the notoriety of these men, with how you know them. For example, knowing that Charlie is petulant, and that Eli is something of a sulker, does not make it easy to think of them as infamous killers. Eli, in particular, is a well-written, complicated character; he confesses to moments of bloodlust, yet at the same time is saddened by the life he leads, and yearns for something simpler. Charlie, meanwhile, is more straight-forward; his ambitions do not take him from the path he is on, and so he has no qualms with anything he does, seeing it all as a means to an end. You get the impression that Charlie always sleeps well.

On the surface, this is a story about greed; the lengths a man will go to to acquire wealth, women, fame. Nearly all of the characters are motivated entirely by want; the Commodore covets what the Prospector has discovered, whilst the Prospector wants gold, and the Sisters Brothers want whatever they can get, and more. However, this is really a story about brotherly love. As with so many novels, the true story lies in the actual journey, as opposed to the events that occur when the characters reach their destination. As we travel with the brothers, the precarious relationship between the two becomes increasingly apparent; Eli is a romantic at heart, reluctant to continue in his role of assassin and dreaming of a woman to love and a shop to own, whilst Charlie revels in the fame and fortune it brings, and seems perfectly content in his life. This disparity between the two naturally causes some disagreements, yet the two remain united in the face of much adversity; when challenged, they stand together, and when they fall, they fall together.


I'm not surprised to say I really enjoyed this book; I always suspected I would, so I can't entirely explain why I took so long to read it. To say I was expecting the usual Western nonsense would be a disservice to Patrick DeWitt, but I certainly wasn't expecting to be drawn in as much as I was, nor was I expecting the characters to be so human. I felt deeply sympathetic towards them both; Eli, for regretting following his brother down this path, and Charlie, for being on it at all. What becomes clear throughout the novel is that what they think they're after is not what they'll find, and that will cause them to question everything that has lead them to this point. Being set in the Old West becomes, as in all good stories, superfluous; it could've been set in Tudor England and still would've packed the same punch. It's not a drastically clever novel, and is fairly linear in it's plot - no surprising cliffhangers here -  but it has it's own nuances and twists that lend it a certain intrigue which mean that, whilst it isn't exactly fast-paced, you are left somewhat breathless by the end.
Posted by Jasmine to a T