Review: To Kill A Mockingbird by Harper Lee 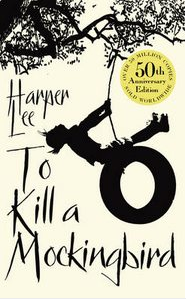 This is one of my most favourite books ever. I've loved it since I was about fourteen, when I was too young to appreciate most of the themes covered in the story, and have read it so many times that now, when caught with a copy in my hand, I'm often greeted with an incredulous, 'you're reading it again?!' And yes, I am reading it again. I will always be reading it again, because I don't think there has been a better book written. My other favourite - Miss Pettigrew Lives For A Day by Winifred Watson - is in a constant struggle for first place with To Kill A Mockingbird, because whilst I love the two more than anything else I've ever read, they offer me such different things that I can't really choose between them; Miss Pettigrew Lives For A Day is a frivolous, feel-good, optimistic story that restores my faith in the notion that good things lie just around the corner. To Kill A Mockingbird is... something else entirely. I can't really describe it because there is so much to it; it's a political and social commentary on racism in the Deep South of 1930's America, and it's a coming-of-age story. In places it's a comedy, in others a tragedy, and sometimes it's a horror story. It covers adult themes, but is told through the eyes of a young, pre-teen girl - although much in the text suggests that the story is being recounted by the same girl, many years later. You can probably now see why I struggle to generalise it; unlike Miss Pettigrew Lives For A Day, which I read for sheer indulgence and is, at heart, a forerunner for modern 'chick-lit', To Kill A Mockingbird is a timeless, ageless novel that I read not just because I enjoy it, but because I respect it.

I first came across To Kill A Mockingbird in the most unlikely of places; I can recall reading about it in a Babysitter's Club book. For those unfamiliar with the series, The Babysitter's Club focused around a group of teenage girls who have formed a mini-business, offering their babysitting services to their friends and families, naturally having all sorts of adventures and making all kinds of discoveries along the way. In the particular story I am thinking of - the actual title of which eludes me - the children's department of the local library is beset with a campaign by irate parents who wish to ban 'inappropriate' titles - of which To Kill A Mockingbird was one. I had absolutely no idea what the story was about, but as I was about eleven at the time, I figured any book that had a title with the word 'kill' in it was probably a bit inappropriate. It wasn't until sometime in secondary school - I can't remember which year - that I actually read To Kill A Mockingbird, and started to become fascinated with it.

The story recounts a number of years in the young life of a girl named Scout Finch, her brother, Jem, and a firiend, Dill, in a small town in Alabama in the 1930s. To begin with, the novel takes the usual turns a book told from a child's point of view would; there are plots, games, confrontations with the maid, Calpurnia, friendships and rivalries with both neighbours and classmates. The three become more aware of the world and people around them as the novel progresses and they start to grow up, but it is not until around a third of the way through the novel that the children are confronted with concerns beyond their years; their father, Atticus, a lawyer, is instructed by the state to defend a black man, Tom Robinson, who is accused of raping a white woman.

It's the narrative that makes this story; in the voice of Scout, Harper Lee successfully entwines a naive, childlike outlook on the world with the beneficial hindsight of age. We're both able to see events from a child's point of view, with the additional help of an adult's clarification. In a story that a child would not understand, yet is told from a child's point of view, many crucial plot points could have become vague and ambiguous. However, with the voice of the elder Scout, observations are made that, whilst subtle enough to pass as an almost conversational recollection, become not only clarifications for major events but also provide a stark contrast between the naivety of childhood and the wisdom of old age.

The trial of Tom Robinson is considered by many to be the main topic of the story; including the lead-up to the trial, and the fall-out afterwards, it does take up around a third of the novel, and given the themes it covers, it is as relevant now as it was when written. It is indeed a major plot point, for it is here that Scout and Jem are forced to finally confront the real face of their society. However, as far as I am concerned, it is merely the climax, and whilst it is a heavy, brutal climax at times, it is only the pinnacle to a period of growth that the two Finch children and Dill go through. There are several key plots throughout the story that contribute to their discovery that life is not divided as simply as black people and white people, adults and children, rich and poor. Their part in Mrs Dubose's final battle, their witnessing of their father's secret talent and the slow realisation of why Boo Radley won't come out is as crucial to the plot as their observation of the trial of Tom Robinson; people just remember the trial most, because the crime the accused supposedly commits - rape - is still as abhorrent and unforgivable now as it was then, whereas the racism depicted amongst the town elders is unacceptable now, but commonplace then.

I won't try to explain why I love this book; there's no point, because I don't know. What I can tell you, though, is that it embodies everything I love about literature. When I read To Kill A Mockingbird, I laugh, cry, fear, think, discover, pity, hate, love and question; everything that there is possible to feel, I feel when I read this book, and when I finish, it stays with me long after. I can never stay away from it very long, and yet despite so many repeat visits, it never disappoints; I never scoff at the dialogue between characters (a bad habit I have), I never question the part certain characters or storylines play, I never skip through bits I find boring or too horrible, and I always find myself reluctant to reach the end.
Posted by Jasmine to a T