Now, I'm going to get to My Pet Hate by a rather circuitous route, so please bear with me...

I love being leant books. There's something really personal about it; generally, if you're going to lend something to anyone, three criteria have to be satisfied:

Allow me to explain these points. If you love it truly, then you love it so much that you want other people to appreciate why you love it. This covers points one and two; you're seduced by the idea or object in question, and you want the person you lend it to, to be equally seduced. However, there's always a reluctance to lend it - you're worried that you won't get it back, and you love it so much that you can't bear to lose it. It doesn't matter that, in most cases, you can replace it; it can't replace the love that came from the first experience. It's not quite the same, but I can give you an example; many many years ago, I was given a stuffed toy, a Dino from The Flintstones, for a present - I want to say it was for Christmas but I can't even remember. Well, for many years, I loved that Dino more than any other toy; he slept beside me in bed, he was hugged incessantly, he was even taken on holiday. One year, I took him to Italy on our family holiday, and on the last day, I left him on the sofa of our rented villa - a fact I didn't recall until we were at the airport, and it was too late to go back for him. I had the address of the villa, and wrote to the owners, telling them of my loss and hoping I would get a parcel, any day now, with my Dino in it. It never came. Eventually, my godparents went to Florida for their holidays, and, wonderful people that they are, they brought me back another Dino - but it wasn't the same. Even now, as an adult (technically), I have this Dino in my flat - but he's a reminder of the Dino I lost. Since then, I've felt the same about lending out things that are dear to me, especially books - I'm filled with that fear that I may lose it. 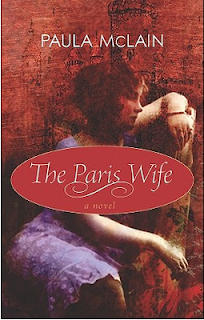 As a result of this fear, however, I like to think I'm a considerate debtor of books; if I finish one, I try to get it back as soon as I can (though I'm still in possession of a copy of American Gods by Neil Gaiman, which was leant to me back in February/March time  - sorry). Recently, I've had the immense pleasure of being leant books by some of my colleagues; very lovely people who have realised my love of books, and want to share the books they love with me too. One colleague, in fact, leant me two  - Girl In Translation by Jean Kwok, and Random Acts Of Heroic Love by Danny Scheinmann, but on the mock-serious proviso that I gave them back quick-sharp as they didn't want to be parted from them too long. The latest lend - The Paris Wife by Paula McLain - has been from someone who appreciates my love of that dashing, revolutionary period of the 1920's and 1930's. And I'm enjoying it; I'm about a third of the way through, and whilst it's not exactly fast-paced, it's compelling enough to keep me reading, and to keep me wanting to read it. However, there's something about it that just niggles me slightly; it's not how the story is told that bothers me, nor even the characterisation. No, it's the story itself, and the characters themselves. It's a fictionalised account of the relationship between Ernest Hemingway, the renowned writer, and his first wife, Hadley Richardson.

I've long felt something akin to dislike about fictionalised versions of real/mythical lives, though I've never quite grasped why; I suppose I've always assumed it was something to do with the fact that I knew the stories so well already that I didn't need to read them again (I'm thinking particularly of anything by Philippa Gregory, and Madeline Miller's The Song Of Achilles - I have to admit I can't quite understand why her book won the 2012 Orange Prize for Fiction). However, it took beginning The Paris Wife to make me realise just what it is that I don't like, and it is this; stories that are, essentially, fictional biographies of people who have already lived, or have already been documented thousands of times. The whole thing just smacks of laziness; you can't come up with a story, or a character, of your own, so you write about someone else's.

I'm not going to deny that creating an entirely new universe, or life, or even a character is easy - after all, C.S. Lewis, author of The Chronicles of Narnia, not only based his main character, Aslan, on one of the greatest historical figures of the last few millenia, but was also told off by J. R. R. Tolkien for 'borrowing' too much of Narnia from other stories and cultures. Nevertheless, Narnia has succeeded, not only as the basis for a wonderful series of childrens' books, but also as a fictional world in it's own right, to rival Tolkien's own Middle-Earth, Pullman's alternative worlds and Rowling's Magical Kingdom. To an extent, every story is bred from a previous story; you have to get your inspiration from somewhere, and even if you can't directly attribute the source, there's bound to be a figure of speech, or an anecdote, or even just the mere mention of a person that spawned the creation. But I'm just not happy with the notion that you've, essentially, taken someone else's life, turned it into a story, and profited out of that.

I can see why people do it; you've fallen in love with a historical period, a figure from history, an era, an art movement, and you want to learn more and more about it, or them - it's this kind of passion that creates experts, and I applaud those people who are able to dedicate their lives in this way. And when it comes to people, I can also appreciate how you might begin to question why such-and-such a person behaved in that way, or how they went from being one person to another, or how events may have affected their judgement and decisions, effectively altering the course of their history. This can easily lead to romanticising people; you begin to piece together the kind of person they might have been, creating your impression of their character, and from a character, comes a story. But despite all this, I simply don't agree with it; apart from the fact you're using someone else's life story, which to me does just seem a bit lazy, you're also not exactly thinking outside the box; you're just re-telling a story you already know, and whilst the old stories are the best, so are the originals; stop treading old ground.
Posted by Jasmine to a T