Hello! Phew, it's been a while, hasn't it? You'll have to accept my humblest apologies for the unscheduled break; to tell the truth, Real Life has caught up with me in all kinds of ways in the past few weeks, and I just have been rushed off my poor little feet. Even worse, I'm moving house (very) soon, and even though I have so far pretty much packed NOTHING, I still seem to have managed to pack up all my books - I suppose, in a fit of panic, I must have decided to pack something, anything, but the fit of panic was tempered by a bout of laziness, so I just went for things that stack easily. Well, that backfired, because in my time of need, when a good book would be a soothing presence on a hectic day, I have been worrying about not having anything to read! But luckily, I've almost been too busy, and so the few books I have had access to have kept me going. One of these books I actually procured from my parents' house, on a visit last week - I'd actually seen my Dad reading it around Easter time, and then during the Jubilee weekend, spotted it on my mum's bedside table, and I was struck with Book Envy. So, on my latest return visit, I nabbed it; The Jungle Book. 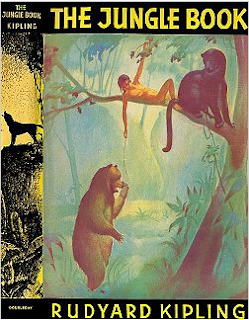 As I'm sure is the case for many of my generation, my first encounter with The Jungle Book was via the Disney animated film version, which to this day remains a cracking film, one of the best that Disney have ever offered. However, as I grew up, I slowly discovered that Disney has a certain way of taking classic stories and legends, which are fascinating enough as they are, and playing them down entirely. That's not a bad thing, as I still enjoy a good Disney film, but it is misleading. As an example, I fell in love with the Greek Gods through Disney's Hercules, and any Classicist worth their salt would tell you that that film, whilst immensely enjoyable (another favourite of mine), is nothing like the legend of Heracles (note the correct Greek spelling; Disney followed in the Roman's footsteps), which is actually pretty dark. Yes, darker than Hades/James Woods getting all power hungry and releasing some brawny Titans on Olympus. The Jungle Book received the same treatment; all the principle characters are there, just warped and dumbed down for a younger audience. Baloo, for example, is not a wise-cracking, swing-singing, heart-of-gold buffoon; he's actually a wise, though slightly bumbling, teacher of the Law of the Jungle, to whose care Mowgli is entrusted. Neither is Bagheera a pompous, stuck up so-and-so; he's actually a creature whom all animals fear as much as Shere Khan. Kaa is, again, a creature to be feared in the book, not a sneaky eater of men. Mowgli is, of course, far less bratty and far more intelligent in the book than the film, and King Louie doesn't even exist in the book. The only one they kept more or less the same is Shere Khan, who is a nasty bit of work, no matter which way you look at it, though he is far less nasty in the film.

All these different characterisations were, the first time I read this, when I was about thirteen, a bit of a culture shock. At that age I knew that most film adaptations involved a certain amount of creative licence, and so are rarely - mostly never - as good as the book (though watching The Lord Of The Rings trilogy takes far less time than reading it, in my experience). So discovering the book upon which one of my all-time favourite childhood films was nothing like the film, was something I took a while to get used to. It's not like I didn't have experience of Rudyard Kipling's writing, either; for many years, the Just So Stories have held a special place in my heart; but those stories are obviously written for a younger audience. The Jungle Book deals with more adult themes and lessons; pride, your place in the world, integrity, the dangers of idleness, the wisdom of the elders, and so on. It is essentially, and literally, a coming of age story; we follow Mowgli from babyhood right through to his life as a young man, and just because he's lived nearly all his life among wild animals doesn't mean he isn't plagued with complex human emotions; doubt, anger, fear, self-righteousness, confusion, hatred. In fact, it's this ability to feel more deeply - and look into the eyes of Bagheera without turning away - that ultimately separates the man from the beast, so to speak. Getting my head around this, when compared with the fun-loving, easy-going ways of Jungle life that Baloo depicts in the film, meant that the first time I read the book, I didn't really appreciate it for what it was.

It's not just all about Mowgli either; in fact, both of the Jungle Books (there's two!) feature aside stories, almost like vignettes, which are to do with the animal world, but unrelated to the main narrative. For example, in the first Jungle Book - the one upon which the film is based - the main story actually finishes before the end of the book; then you're treated to a few lovely 'extra' stories, that take place outside of the jungle; these have certain lessons to them, dealing with subjects such as fate, determination, courage and stamina, as well as being immensely enjoyable stories by themselves (which, incidentally, would probably also make good films... just saying). My particular favourite is The White Seal, which is actually an example by itself of the more grown up themes The Jungle Book; it follows a young white seal in his quest to find a safe haven for all seals to live in, after he witnesses his friends being murdered by seal clubbers. Yep, that's right; there is seal-clubbing in The Jungle Book, and it's as brutal as you would expect it to be. This is why it's a favourite of mine; it doesn't shy away from 'nasty' subjects, or patronise young readers - instead, it gives them a view of  the kind of animal cruelty that does happen, and is happening, in the world, but presents it to them in a manner that wouldn't give them nightmares. Actually, it's probably more harrowing for adults to read, as we know it's not just a story; but it doesn't deliberately put the scarers on children, whilst also not shying away from exposing elements of the world as they are.

I said earlier that I didn't quite appreciate The Jungle Book for what it was the first time round, and I have to say I probably don't fully appreciate it now. There's so much there to enjoy; not only have you got the sublime story of Mowgli growing up in the jungle, friends with panthers and bears and wolves, but you've also got the wonderful mini-stories which take you out of the jungle, and give you a view of the animal world at large. It's beautifully written; reading the book, you can almost feel the humid air of the jungle around you, hear the calls of monkeys and birds in the trees, see the gently dancing shadows on the ground. There are also poems and songs interspersed between chapters, providing breaks between chapters whilst at the same time further illustrating the point of the previous chapter. The Jungle Book offers something that I don't think you get in much young-adult fiction now; a story that still plays on that childlike fantasy of being able to talk and live with animals, whilst showing that there is so much of the world - naturally, geographically, emotionally and historically - than you've seen in your back garden.
Posted by Jasmine to a T