Review: 'Pride and Prejudice and Zombies' by Jane Austen and Seth Grahame-Smith

As a young, easily-influenced teenager studying GCSE English Literature, I, like pretty much all the others in my all-female class, fell in love with a certain Fitzwilliam Darcy of Derbyshire when we, as part of our study of the novel 'Pride and Prejudice' by Jane Austen, were allowed to watch the BBC serial from 1995 in lessons. In hindsight I think it's safe to say we fell in love with Colin Firth more than Darcy, who, let's face it, is a bit of an [insert favoured expletive here] for the first part of the book, where as Firth is just lovely all-round. Since then, I've read the novel quite a few times, mostly because I quite like the flow of language that is characteristic of Austen's books, but also because it's quite a nice, simple story that nearly everyone knows of in some form or other, that's been adapted many, many times owing to it's status in the nation's heart as a favourite love story.

So imagine my surprise when, at university, a friend gave another friend, who was a self-confessed Austen-hater, a copy of 'Pride and Prejudice and Zombies' for her birthday - not only did I not know such mash-ups existed, but I wasn't sure how I felt about 'interference' with a novel already so well-loved by so large a number. Mind you, as I reasoned at the time, no one's forcing me to read it, I can happily stick with my good old, dog-eared, normal version. 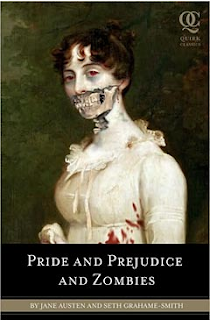 How I actually came by my copy of the Zombiefied version I'm not actually sure - I think someone might've given it to me, but then I might've bought it myself - it's one of those I can't really remember where, or when, I got it. However, whenever it may be that I did come into possession of it, I haven't read the original since. From the first line, 'it is a truth universally acknowledged that a zombie in possession of brains must be in want of more brains,' you know immediately that you are not in Regency England any more; or rather you are, but in an alternate version where the undead roam the earth and the Bennet Sisters are martial artists and deadly with a katana, musket - any type of weaponry that you can imagine. There's one character - who shall remain nameless here - who manages to slay the 'unmentionables' with nothing more than a damp envelope. I'd like to see even Chuck Norris achieve such a feat.

The devilishy-simple charm of this novel comes from the fact that the original story - and, for the most part, the original text - remains almost entirely unchanged. My copy of 'P&P&Z' certainly seems smaller, with bigger print, than my copy of just 'P&P', and yet I cannot think of a single occasion that has not been left out; I guess maybe some of the less crucial scenes were shortened, but on the whole it is an incredibly faithful representation. Some characters are killed off, but not before they've served their purpose, and there are alternate endings for others, but it all ties in really well with the story, the new way of viewing the characters and the general importances placed on the deadly arts in this Zombie Regency. But most of all, it is the language that amazes me, because even in the bits where it's quite obvious that Seth Grahame-Smith has taken over, it still 'fits'; at no point does it it feel like you've jumped from Austen, to Grahame-Smith, to Austen again - it's all kind of seamless. All I can guess is that Grahame-Smith not only very carefully studied the manner that the original was written in, and the way the characters spoke, but also scoured each page to see where he could effortlessly slide in a zombie-reference here, a battle-scene there, etc. Well done, that man. Of course, it's not all perfect - there are some pretty cheeky references that certainly were not in Austen's novel, such as Elizabeth's obvservation of 'the way (Darcy's) trousers clung to those most English parts'. See, you know that's not meant to be there, yet it doesn't seem entirely out of place - it's just because you know that, in Regency England, where manners reigned supreme, no one would dare refer to anything so, well, private - ahem.

I must add it's not really for the faint-hearted; there are some gruesome illustrations in my copy, and whilst they are just (beautifully drawn) illustrations, it was a bit of a surprise the first time I read it to turn the page and see the Bennet Sisters slicing some zombie throats. Then there are some detailed descriptions of zombie-deaths and zombie-customs that are a bit, er, well, gross is the best word, I guess. It's not for purists, either; if you're the kind of Austen fan who believes that her works should remain untainted by such alterations, then I don't recommend this at all, and certainly not another one that was written, 'Sense and Sensibility and Sea Monsters' by Ben H. Winters (which, incidentally, is not as good as 'P&P&Z', but still very enjoyable nonetheless - especially when Colonel Brandon first arrives and he's basically a squid from the neck up.) If you're not a fan of zombies either, don't read it - whilst they aren't the main characters (mostly... ooh or am I bluffing?), there's enough of them to warrant an inclusion in the title so you're probably best off avoiding it.

I really, really enjoy reading this, and every time I do read it, I always laugh at the zombie bits, smirk at the self-referential bits and enjoy the basic story, which, as I said before, remains unchanged in the plot line and the main plot points. I also always seem to forget - though I probably won't from now on as I'm about to write about it - that there's a hilarious little 'Reader's Discussion Guide' at the end, the kind you do get in the versions of novels that are specifically published for studying in class. It really does make you think about the novel more deeply, and consequently adds to your enjoyment and understanding of the novel - especially when pondering such questions as, 'Some critics have suggested that the zombies represent the authors' view towards marriage - an endless curse that sucks the life out of you and just won't die. Do you agree...?' I also have to say that I prefer the idea of women who spend their days practising stealth tactics and slaying zombies, who carry daggers and can support their entire body weight on one finger, to the insipid sewing, piano-forte-playing, reading sisters of the original - I'm no feminist and I certainly don't carry daggers, but it makes a change to the atypcial heroines of the day, who sit around waiting for the men to come into the room before the fun can begin.

There's probably a surprisingly small number of people who'd want to read this; first, you've got to find people who don't mind the language of Regency novels - some people just don't get on with them. Then, you've got to find in that group the people who wouldn't mind it being adapted for comedic purposes, and then in that subgroup, identify who likes zombies. It's potentially a niche market. For example, my boyfriend flat-out refuses to read it, despite my insistence that it's nothing like the Pride and Prejudice adaptation that I made him watch six hours of over the course of a week; and I can kind of see where he's coming from, as it is, essentially, still a girls' book. The main characters are women, and the main feel of the novel is still there - the zombies merely add to the fun, it's still all about the Darcy/Elizabeth love story and that mustn't be forgotten. However, I'm sure his mind will change when I drag him to see the film version when it finally comes out (no news on when that will be just yet.) So in the meantime, I suggest you familiarise yourself with this zombie-killing, katana-wielding, all round ass-kicking version of Austen's classic, and dare you to say the zombies don't improve it.
Posted by Jasmine to a T