Review: '1000 Years Of Annoying the French', by Stephen Clarke.

Now before we get started, let's clear one thing up; I am not a Francophobe. I actually stumbled across this tome in a Waterstones in Brighton about 6 months ago, and, being easily amused, noticed the title and took a look. I was also intrigued as I was going on a trip to France and I liked the idea of having some related-reading for the plane. In hindsight, I could've chosen a less inflamatory-sounding title, and consequently wouldn't have chickened out of reading it on said plane (instead I read my boyfriend's book over his shoulder.) 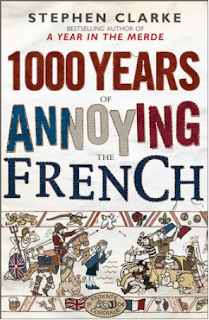 So, we know why I chose it to read in the first place; now why to review? Well, it's mostly because it's the first one I thought of. No, seriously. But I learned to trust my instincts a while ago, and this time I've decided to follow them.

This, as one might guess by the title, is a history of the relationship of France and England, covering a millenium, from William the Conqueror deciding he wanted to be King of England, right through to the building of the Channel Tunnel. It's also a light-hearted explanation of how the English are always right and the French are always wrong, even when the French believe otherwise. Obviously this is not to be taken seriously, but it certainly makes for entertaining reading, especially during a chapter entitled, 'Food, Victorious Food' - as a nation, we are inherently jealous of the France's natural affinity with all foods delicious, so it's particularly enjoyable to sit and find out that actually, the croissant is technically Viennese and that the British came up with the way to cook steak first.

This is, by no means, a usual choice of book for me. Whilst I absolutely love history and am fascinated about the process of how we went from that to this, from then to now, ever since I left university I've not felt any real desire to go out and buy a proper history book, so this was a first for me. As a result, I'm no expert on what makes a good history book, but what I do know is that, throughout the 640 pages or so that it took to account the turbulent Franco-Anglo relationship, I was (for the most part), engrossed, and, just as importantly, amused. I've since read several other books of the same ilk, and none of them have made me chuckle in quite the same way, and neither have they engaged me in the same way. As well as this, I didn't feel bogged down in the language; you know how some history books like to get clever with language, and start using over-long words? Well this one doesn't, and as a result, it's that bit more enjoyable to read. I always find I get along with a book better if I don't have to 100% concentrate on what I'm reading, so I can let my mind wander and start to imagine what I'm reading.

I will admit that I did get a bit tired towards the end of all the France-bashing; I understood when I bought the book that I was committing to some hardcore, tongue-in-cheek anti-French reading, but eventually I came to feel that that the point was being laboured. The very last paragraph rather shakily argues that using St Pancras as the new UK terminus for the Eurostar is a bit of an 'up yours' to the French, like the old terminus, Waterloo, was a bit much for me (not to mention a bit of a poor finish to an epic history). It's just a train station, for goodness' sake, I don't think that much thought was put into it, beyond which station was central enough and large enough to be both a national and international station.

Over all, this was a surprisingly enjoyable read; I was a bit daunted by it at first, given the size and the fact that it was the first true-history book I've read since university, but since then I've not only dipped into it from time to time, but read it cover-to-cover more than once. It's taught me so much about French history, but also about English, American, and European; in one read I think I doubled my understanding of the history behind some of the most powerful and influential relationships of the last two hundred years. But more than this, and so much more importantly, it inspired me to learn more about my own country's history; not long after reading this, I bought 'A Short History of England' by Simon Jenkins. I think it's a general consensus that a good teacher not only teaches, but inspires you to learn more; in which case, Stephen Clarke, you're good teacher.
Posted by Jasmine to a T