Review: The Rook by Daniel O'Malley 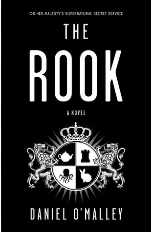 I downloaded this book onto my Kindle about, ooh, 3 months ago, and I've only got around to reading it very recently. This is the curse of the Kindle; when you have access to so many books so quickly, it becomes far too easy for you to download one book with the full intention of reading it soon, only to find that your fickle heart is swayed by a new title. I myself currently have seventeen - yes, SEVENTEEN - books on my Kindle that have remained unread despite download, and all because I have a wandering eye when it comes to books. However, when the Boyfriend pointed out that this was a very uneconomical way to buy books, and certainly not how I would've done it with print copies, I was shamed into picking one of the rejected as my next read, and this turned out to be The Rook.

I can honestly say I have no idea why I downloaded this book. I can remember selecting it for download; I just can't remember why, because when I started reading it, I had absolutely no idea what was going on - blurbs aren't exactly easy-access on ebooks, especially not when you've already downloaded them. (Not that I'm complaining; I like the mystery of a plot where you literally have no inkling of what is coming next, especially as I've recently gone off blurbs. I've recently ploughed my way through A Song Of Ice And Fire by George R. R. Martin, the book series that Game Of Thrones is based on, and I managed to ruin Part 2 of A Dance With Dragons - basically, the last book in the series so far - by reading it's blurb before I'd read Part 1, which managed to ruin a major plot point for myself. But I digress.) It actually turned out to be a supernatural comedy-thriller with a dash of James Bond thrown in for good measure.

The story begins with Myfanwy Thomas, moments after she has woken up in the middle of a park surrounded by bodies with no memory of who she is or how she got there - all she has for a clue is a series of letters, written by herself, to herself, in the months leading up to the memory-loss incident in the park. As Myfanwy attempts to discover the circumstances surrounding her re-birth in the park, who she was before the incident and why she lost her memory in the first place, she has to try to disguise her amnesia from her colleagues in a super-secretive organisation dedicated to the management of supernatural forces in the UK. It's a pretty tough thing to do, so it's lucky that Myfanwy has the letters from her old self to guide her along. Unfortunately, her new persona is a rather bit more... sassy, shall we say, than her previous one, so cracks begin to show in her ruse, just as an ancient threat to the organisation rears it's ugly head.

Whatever I was expecting, this was not it. In fact, the opening line - 'Dear You, the body you are wearing used to be mine...' had me all prepared for some kind of body-snatchers type scenario, involving a conspiracy to put new souls in old bodies. Which, if I'm honest, I'd say is actually quite a good idea, although the first time I started to read this, that notion put me off - I'm not a huge fan of science-fiction, and I got the impression that this is what The Rook was. Once I gave the book a fair go, however, I discovered that it actually falls in with the fantasy genre, something I am a bit more at home with. It's not too clever in this respect, either; unlike most books which deal with a supernatural setting, what O'Malley has preferred to do is simply assimilate the fantastical in with the real world, as opposed to creating an entirely new land, animals and, in some cases, language. It is a bit like Harry Potter or - shudder - Twilight for adults in this sense; there's enough of the familiar to give the uncanny aspects of the novel a bit of a believable edge (not that I believe in vampires or wizards - I learnt that when my Hogwarts letter never arrived). And to make it identifiable as a 'grown-up' novel - rather than a different cover - there's quite a bit more gore, murder and bureaucracy to it than you may encounter in any of it's teenage counterparts.

It's funny, too; I know that sounds like a really stupid thing to say but honestly, it's refreshing to find a book that is not firmly wedged within a certain genre; recently, I've noticed that some of the books that I have been reading have been taking themselves a bit too seriously, and whilst in some that is appropriate, in others I think it's a shame. Admittedly, The Rook hardly deals with serious issues - it's a government organisation dealing with supernatural forces, it's ripe for ridicule - but whilst the plot isn't particularly silly, the main character has enough wit about her to make for entertaining reading. O'Malley also makes excellent use of other characters' confusion about Myfanwy's sudden personality transplant, which again not only amuses the reader but also ties you in with Myfanwy: only you and she know the secret about her identity, which lends her character more of an edge, and also ties you closer to her.

I don't actually usually get too excited about new books I've read - they're either a bit disappointing, or just simply enjoyable, but unremarkable - but every once in a while I do, and this is one of them. It felt like even more of a treat, simply because I discovered it purely by accident. It's a surprisingly refreshing idea, with a sympathetic lead character, and potential for the world O'Malley has created to be expanded. It's also accessible to both men and women; I feel that, previously, books I have reviewed have more often than not been more appealing to girls (which, as I am a girl, kind of makes sense); The Rook, however, has a decent balance of humour, action, suspense, and more than enough cliff-hangers to keep anyone reading well into the night. And best of all? No romance. There's nothing like an unsuitable character pairing midway through a novel to put you off your stride. It's also inspired me to give the rest of the unread seventeen on my Kindle a go, as who knows? Maybe there's another new favourite nestling in there somewhere.
Posted by Jasmine to a T