That festive time of year is once again upon us, spreading general good will, cheer and a mild sprinkling of increasing panic as everyone suddenly realises that actually, it's coming up pretty darn quickly and oh my god, I haven't bought anything. It's a weird time of year, Christmas; you're forced to go outside shopping in one of the coldest months of the year, expected to send cards to people you haven't contacted since last year's card, and as far as us Brits are concerned, it's the only time of year when we really go all-out on decorating our houses in psychotic lighting. Yet despite all this, Christmas is, for most people, a happy time of year; it's an excuse to get drunk with anyone that you can call an acquaintance, eat as much food as your poor tum will hold, and start indulging in all of those Christmas-only activities - singing Christmas songs, watching Christmas films and, my personal favourite, reading Christmas books. So, if you're not quite in to the festive spirit yet, here's a few of my best Christmas Books to make you feel all warm and cosy inside.

1. The Night Before Christmas by Clement Clarke Moore 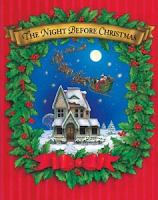 "'Twas the night before Christmas, when all through the house, not a creature was stirring, not even a mouse..." So begins the infamous, sparkling poem that sums up all the wonder, excitement and anticipation that Christmas - especially Christmas Eve - holds for children and the young-at-heart. Even now, when I read Moore's account of a man witnessing the arrival of Father Christmas to his home, I still get a gorgeous tingly feeling up my spine, as I recall how thrilling Christmas Eve was; putting out the mince pie and brandy for Father Christmas (and a carrot for Rudolph), before hanging out my stocking at the end of my bed, then trying so hard to go to sleep even though my heart was near bursting out of my chest as I strained to hear the distant tingling of sleigh bells... Nothing captures that feeling in quite the same way as The Night Before Christmas, which more than adequately explains why this poem has endured for so long, enchanting so many children.

Don't let the incredibly boring title put you off - this is a cracker (excuse the pun) of a compilation.  Nettell has selected hundreds of poems, short stories and extracts from novels to create a book that holds within it's pages almost every conceivable aspect of Christmas. There's a section dedicated to food and drink, another to the giving of gifts, yet another to the original Christmas story of Mary, Joseph and Jesus... the list goes on. There's also a pretty wide timespan covered here, with diary entries stretching back to pioneers celebrating Christmas during the long trek West, and Samuel Pepys' yuletide extravagances. You'll also see extracts from The Moomins, Ramona and Beezus and A Christmas Carol. My favourites, however, are the poems, and there are dozens of them to go around - an ode to Christmas stockings, Bad King John's plea for a particular present, a donkey's view of Christmas.... Some of them are thought-provoking (one about a father spending Christmas in a homeless hostel always gets me) but others, like Ogden Nash's I Remember Yule, a mild rant at how the values of Christmas have changed, are more light-hearted. It's wonderful to dip in and out of, but just as good to read cover-to-cover. 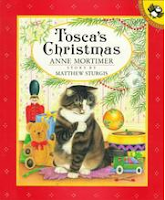 This is a children's book that I've had for as long as I can remember and my god, do I love it. It's a beautifully-illustrated picture book with a lovely story, featuring the fluffiest-looking tabby cat I've ever seen, who just can't seem to find her place in the mad, mad world of Christmas. The story follows our feline friend as she discovers the human joys of Christmas - she manages to sneak a mince pie from the kitchen, attempts to have a paper chase with someone's wrapping paper, and even has a go at making a wish with the Christmas fairy at the top of the tree, all the while driving her human owners to distraction. Poor old Tosca becomes increasingly dejected with her lack of place in all the fun, until a certain, red-cloaked and bearded someone comes along with something special for Tosca to make Christmas all better... It's just lovely, and even though it's intended for an audience far younger than myself, I don't feel like it's Christmas without reading Tosca's Christmas at least once.

I've actually got no idea about where this book came from - I suspect that Christmas elves had something to do with it - but it's another fantastic compliation, this time of original Christmas short stories by childrens' authors including Malorie Blackman and Adele Geras. There are some amazingly Christmassy stories in here; for example, a particular favourite of mine is one about a group of pirates - who are not so fearsome as they would like to think - throwing themselves fully into the spirit of Christmas, decorating their ship, cooking a feast, telling jokes. Then there's one about a boy who wishes that every day was Christmas, only to get his wish and find that it's not quite how it seems... Some of them are a little more sombre in tone, such as the boy who buys Christmas crackers from a strangely-familiar figure, under the belief that they will stop his parents arguing with each other, but in each story the magic of Christmas is a running theme, which is why I re-read it every year; I've found, as I've 'grown up', that I'm starting to realise why my parents find Christmas stressful, so it's good to get back to those childlike feelings of anticipation and excitement that Christmas brings.


5. A Christmas Carol, by Charles Dickens

Well, there was no way this one was going to avoid a mention, was there? Possibly the most familiar Christmas story of all (with the exception of the original one, featuring Jesus), I think most people of my generation have grown up with the story as told (surprisingly faithfully) by The Muppets. For those of you who have been living under a rock, however, a summary: a miserly old man who detests Christmas is visited by the three spirits of Christmas - Past, Present and Future - in an attempt to teach him the real joy of Christmas, and repent his grouchy ways. My mum always says that you need a good ghost story at Christmas, and, being a complete coward, I disagree. With A Christmas Carol, however, I make an exception; as ghost stories go, it is pretty chilling in places, but for the most part, it's a celebration of what the festive period should be about: family, friends, happiness, spending time with your loved ones. One of the most poignant scences - and also the one featured in Collin's Christmas Treasury - is when Ebenezer Scrooge witnesses his poorly-paid clerk, Bob Cratchit, celebrating with his family as best they can on a meager budget, but as happy together as if they were millionaires. It's the simplicity at the story's heart that makes it such a magical story, and if you haven't read it, I urge you to. I don't blame you if you keep hearing songs from The Muppets' Christmas Carol while you do, though. ("There goes Mr Humbug, there goes Mr Grim...")

I hope you've enjoyed my little Christmas summary, as much as I enjoyed writing it, and if you have any Christmas stories or poems that you love to read every Christmas, please let me know - I can never get enough of a decent Christmas story!


Merry Christmas!
Posted by Jasmine to a T