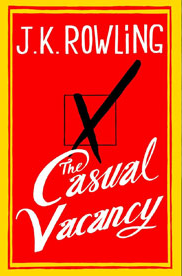 The Casual Vacancy is Rowling's first foray into the world of adult literature, coming after the infamous Harry Potter series. Consequently, it's going to be a bit tricky to avoid comparisons between both her ventures. Or at least, that's what I thought before I started reading The Casual Vacancy. There are comparisons to be made, of course - whether she likes it or not, Rowling must know that anyone who's ever read a Potter book would be intrigued to see the direction she takes in her next book, and that the probable majority of purchasers of The Casual Vacancy would be the same adults who read Harry Potter to their children, and people like me who grew up with Harry and are now (technically) adults. I have to say that, initially, I had absolutely no interest in reading this; being such a massive Potter fan, and being very aware of the fact that it was not a Potter book, I just didn't care very much. It's not that I am of the ilk that believe that Rowling should churn out Potter books for the rest of her natural life, writing spin-offs and prequels and sequels and all the other money-making ventures she could wheedle out of her hugely popular characters; on the contrary, I think it's time for her to move on, to stick to her original plan and to allow Potter to be the shining beacon of excellent children's literature that it is, without compromising it. My reluctance actually came from simple disinterest; I'd heard the story began with a man dropping dead in a village, and that just didn't pique my interest. Eventually, though, once the book did come out, I thought I would quite like to read it, and gave it a go. It's a tale of the aftermath that reverberates through a small village when a Parish Councillor dies suddenly, leaving behind a casual vacancy - a post on a council that has come free through unexpected means, such as a death or a resignation. Subsequently, a number of petty rivalries and disagreements swell into a festering ball of resentment, anger and revenge that threatens the supposedly close-knit community of the seemingly idyllic village of Pagford.

It's nothing like I ever expected. It doesn't even read like Rowling has written it; in fact, if she had decided to have it published under a pseudonym, I wouldn't have had an inkling it was by her, and that's because the language is a lot more grown up. I don't just mean the dialogue of the characters; descriptive passages also felt different, somehow. This was initially off-putting; it's a bit like when your phone rings, and a familiar name shows on the screen, but the person on the other end of the phone doesn't sound like them when you answer. There's an initial jarring moment as you wonder if someone else has rung you, and you struggle to realign yourself to the change in dynamic of the ensuing conversation. It doesn't matter if it turns out it is who you thought it was, and that they just had a cold, or had just swallowed a swig of tea quickly; there's still that moment of discomfort when you're not quite sure who you're dealing with. For a good 40 pages or so, I struggled to acclimatise myself to The Casual Vacancy in a similar manner, and so it took me longer to get into what was actually a very compelling story than it usually would.

The main plot - if there is one, as there are several storylines running alongside each other - focuses on the election that needs to take place now a spot is available. The three candidates are all running for very different reasons; one is compelled by his puffed-up sense of importance, another by the hints of bribes and backhanded dealings that he could benefit from, and the third by the need to continue the now-dead councillor's work. As they each struggle to persuade the village to their cause, an outside, underestimated force finds a method through which they find they can wreak vengeance on the wrongs perpetrated against them, without considering the consequences. This makes for fascinating reading, as it highlights the damage that gossip can do, and how you should never assume that everyone is on your side.

Many of the characters, however, are unsympathetic. To begin with, there's almost too many - it seems Rowling has tried to portray each member of the entire village, and as a result I struggled to keep track of who was who at different points; names would crop up and I would have to take a few moments to recall exactly who they were, and how they were connected to other people (and all the characters were connected to each other in some way). With such a large cast, it was difficult to feel anything for all of them - and that was without the vast majority appearing to be a stereotype; the single mother, the drug addict, the mouthy rebel, the resentful, neglected wife... they seemed to be stock-characters, taken from the usual supply, and I felt that it had become a case of quantity over quality, with Rowling trying to cover all her bases, and so that made it difficult to root for anyone - if you haven't got anyone to be on the side of, it makes getting involved in the book much harder.

However, even if the number of characters was depleted, and I found it easier to remember them, I still would have struggled to enjoy this novel, due to one key factor: the content seemed to be all about deliberately shocking the reader. Literally, every possible vice, crime or sin was shoe-horned into the plot, with characters either committing or alluding to these evil deeds and thoughts. Seriously, there is every kind of wrong being perpetrated in this novel; it's like Midsomer Murders, how corrupted can one community be?! Initially, these evils shocked and appalled when they cropped up, as they were probably meant to, but after a while it just got boring, to the extent that, after each reading session, The Boyfriend was subjected to an updated list of the latest wrongs that had occurred. Maybe this was the point Rowling was making, together with the dirty secrets of the characters, that every community, no matter how idyllic it might appear, has cankers at the core. This might be true - I'm sure every family has a few skeletons in the closet, or a relative no one talks about, or 'the black sheep' - but after a while these constant crimes, these supposed shocks, just got dull; nothing really surprised me anymore, beyond the fact that these imaginings came from the same brain as dear old Ron Weasley came from.

I wouldn't say I would never read this book again; I probably will, because despite the bleak content - and it is very bleak at times - I did find it an engrossing read, and difficult to put down, probably because the way in which all these secrets erupted to the surface of the calm Pagford community appealed to the gossip in me; I think we'd all be lying if we claimed we'd never discussed someone behind their back, or kept a particularly close eye on a neighbour we didn't quite trust. It's a very clever novel in that respect; it plays on the guilty pleasure that gossip is to most people, whilst also demonstrating the damage it can do. It didn't make for comfortable reading though, and this was probably the most off-putting thing; I never expected a Potter-esque novel, partly because that kind of thing comes along once in a generation, and partly because if I were her, I'd probably want to make it clear to the world that yes, I can write a magical world, with amazing characters and fantastic places, but I'm also capable of being really gritty and real too. Perhaps that's why The Casual Vacancy plays out as it does; it's a deliberate juxtaposition between the black-and-white morality of Harry Potter and Hogwarts, and the stark reality of the 'Muggle' world. However, when you think you know a writer's style, and then find they've written something that is not just completely different in content, but also feels different to read - that can be, and was for me, unsettling. Next time I read it, however, I'll be prepared, and maybe I'll find a bit more to enjoy than the gossipy tone.
Posted by Jasmine to a T