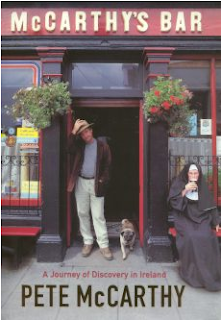 I very nearly didn't review this book, but then I found out that the author had died in 2004, from cancer. That was a long time ago, but as it was brand-new information to me, it was as much of a shock as if I'd heard about it the same day as he passed away. As I'd just finished reading McCarthy's Bar not long before I found out, the memory of the events of the book were still fresh in my mind, and subsequently - inevitably - the death of the author immediately gave the book a more poignant edge. Partly in honour of the author of one of my favourite books, and partly in response to the new perspective of the book his death has given, I decided to review it.

McCarthy's Bar is a non-fiction travel book, focused on Pete McCarthy's Irish descendancy, and, in his own beautifully-put words, 'Is it possible to have some kind of genetic memory of a place where you've never lived, but your ancestors have? Or am I just a sentimental fool, my judgement fuddled by nostalgia, Guinness and the romance of the diaspora?' Travelling around Ireland, he tries to ascertain which is responsible for his emotional ties to the country, whilst simultaneously being able to apply one of his many self-penned rules of travel: Never Pass A Bar With Your Name On It. As 'McCarthy', or 'MacCarthy' as it is spelt occasionally, is a very Irish name, he has many opportunities to abide by the rule - some with almost fantastical consequences, others with dull-beyond-remark outcomes.

The first and foremost appeal of this book to me is my own ancestry; I am half-Irish on my mother's side, and yet I've never been to Ireland, not once, and I've only met my Irish relatives a handful of times. Subsequently, my love for this book is tinged by something akin to jealousy; here is a man, with as much genetic claim to the country as I have, freely and ably exploring his genetic roots, whilst I (as a result of my mother's English upbringing, and my own) struggle to celebrate St Patrick's Day in the usual manner. Occasionally Pete finds his English-We-Don't-Go-In-For-That-Sort-Of-Nonsense-Side battling with his Irish-Just-Get-On-With-It-And-Have-A-Good-Time-Side, but at least his Irish side puts up a fight; if mine exists as anything more than a few strands of DNA, it's mostly evident in my pale complexion and crippling bouts of Catholic guilt (as Pete so adequately puts it, 'If you've had the right kind of education, it's amazing how many things you can find to feel guilty about.'). Reading about his own exploits across Ireland, whilst taking in the sights and sounds of what sounds like a beautiful country, both makes me feel like I, too, have a connection with Ireland, whilst also encouraging me to one day get round to visiting.

The other appeal is this notion of feeling at home in a place you've never lived; I've felt this one or two times before in my relatively short life, and it is an intriguing notion - the idea that home actually is where the heart is, and not necessarily where your family is, or your childhood was. Pete touches on this point in a chapter titled 'A Place of Resurrection', referencing a quest made by Celtic monks who would travel around Europe, searching for the place where it felt like God was calling to them, before settling there. All religious connotations aside, this is a very optimistic, hopeful way of looking at life; the idea that somewhere in the world there is a tangible place that you completely belong, where your optimum happiness can be obtained, and that it's out there for the finding - a comforting thought in times of difficulty.

But there is more to it than this spiritual questing; it's actually a really funny, laugh-out-loud book. Pete was an experienced traveller, but it seems nothing can prepare you for Ireland, even childhood memories of the place. He encounters people who are so 'Oirish' that you wouldn't believe they exist, English hippies living in mountains, Essex tourists, Northern Irish escaping the marching season, religious fanatics (not just the Catholic kind, either) and Noel Redding. He becomes the laughing stock of a town for mis-diagnosing a bird up his car exhaust, chooses to go on one of the toughest Catholic pilgrimages there are at Lough Derg, gatecrashes a feast at a medieval castle and finds himself the guest-of-honour at the birthday party of a landlady he's just met (the landlady of a McCarthy's bar, of course). It's almost easy to dismiss these events as fictionalised - they wouldn't seem out of place in any British fiction novels - but as the disbelief of the author is evident in his accounts, you come to accept it as fact. There's a very Any Human Heart quality to it - it all seems both remarkable, and yet unremarkable, and it does make you think back on events on your own life which you took in your stride, but in retrospect maybe were a bit out-of-the-ordinary.

I have to say here that there is a bit of stereotypical air to the book; most of the Irish people Pete encounters are eccentric, overly-friendly, harmlessly invasive drinkers, and I think it's this portrayal that lets the book down; my Irish grandparents and my mother all dislike the book intensely on the basis that Irish people aren't all like that, and that the whole place has been romanticised, like some mystical neverland, rather than treated as the country it is. Furthermore, the book was written during the full power of the Celtic Tiger economy, when Ireland was massively economically successful - given the state of not just Ireland, but the Euro-zone in general, it's sad to read back on how optimistic everyone is, Pete included, when you know how the story is playing out now.

The poignancy of Pete's quest to find his spiritual home was always a powerful one, but has taken on new depth now I know he died 6 years after McCarthy's Bar was first published; I always got the impression he intended to move out to Ireland one day, and fully claim his ancestral heritage, but now I know he never did. It's a lesson, really - don't rest on your laurels, don't live by a 'tomorrow' rule - one that I may have to adopt, and is already encouraging me to start planning my first visit to Ireland. Nevertheless, even with this additional sentimentality, I've read this book so many times now that it's currently held together with sellotape, and every time I read it I enjoy it as much as the previous time - although, I suspect next time I read it, there may be a few wistful sighs, as I contemplate more than ever if he did ever work out the answer to his question.
Posted by Jasmine to a T