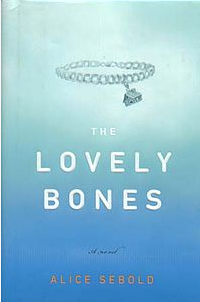 I used to love this book. It was one of those that you have to read several times a year, and for a while, it even held the top spot in my own personal Top 10 Favouritest Ever Books. Then Peter Jackson got hold of it, turned it into a film and that was the end of that. Sure, the all-star cast - Stanley Tucci, Saoirse Ronan, Mark Wahlberg, Rachel Weisz and Susan Sarandon all feature - did a fairly decent job, but as happens so often, I felt that the film did not live up to the book. In this particular case, I felt that Peter Jackson had got a little bit too special-effects-happy, and had focused too much on Susie's interpretation of Heaven. Similarly, he had also put a lot of emphasis on Mr Harvey, and - as I shall explain later - that is not the point of the book. Subsequently, sadly, I left the cinema depressed and didn't pick up the book for about two and a half years - I just knew that, try as I might to avoid it, I would find myself recalling Jackson's interpretation of a scene when reading it, and nothing ruins a moment like someone else coming in and splashing their version all over it, particularly if it jars with yours. Call me selfish, call me vain, but I think my interpretation of scenes are the best ones, and I don't care for someone else's version very much unless it's exactly the same. (This was, in fact, a lesson I learnt as a result of seeing this film).  It wasn't until a recent conversation with my cousin, in which she had commented on the film version of The Lovely Bones, that I found myself wanting to read it again; so, before lending it to her, I decided to read it.

The Lovely Bones tells the story of the brutal rape and murder of a young teenage girl, Susie Salmon, and how she follows her family from her Heaven as they individually struggle through the years to regain balance and cope with her death. Given the subject matter, it's - unsurprisingly - difficult to read at times; Seabold does not shy away from what might be termed 'the gory bits', which are made all the more vicious by the otherwise poetic tone of the novel. However, as mentioned earlier, Susie's death, and her murderer, are only part of the story, and Susie is only the central character for being the narrator; the real story lies amongst her family, and the ways in which they attempt to cope with her death, understand her absence and endure the unwanted celebrity that violence brings.

First things first, beware; if you are, like me, a fairly emotional person, do not expect to make it through this book unscathed. There will be parts of it at which you will find yourself struggling to read the page because your eyes are swimming with tears. The really tricky bit is knowing exactly when the tears will hit, so that you can prepare yourself; get a tissue ready, make sure no one is around to see you, that kind of thing. Obviously first-time readers will not know when these moments will come, so will just have to wing it, but anyone who's read it before will probably have their own parts mentally bookmarked where they just know a chord will be struck and tears will begin flowing. Unfortunately, as I discovered, these moments are changeable; what had been the point at which I normally break down left me dry-eyed, whilst I found myself unexpectedly and quietly sobbing my way through the first 30 or so pages - a hitherto unknown event that caught me completely by surprise and so without any of my usual anti-tears tools. Instead, I just had to hope that my sunglasses hid most of the damage - I was sat in the garden - and that my snuffles could be put down to hayfever by anyone who might overhear (I don't suffer from hayfever). Such is the power of this novel; at different times, different parts can affect you; a change in your life might render a new response to a passage that had previously not meant anything to you. As a novel that deals with such a horrific subject matter, it's not surprising that there are so many scenes and events that may impact in various ways, depending on the point of view of the reader.

(I'm just going to take a quick moment to clarify - this is not a girls book, so I hope any boys reading aren't put off by the emotion of it. It's an everybody book, it just so happens that the language used, the scenes described, the characters involved often create images that are so bittersweet, or horrific beyond comprehension, that if you are inclined to the occasional sobfest, may wrest a tear from your eye. Hard-hearted types should not be put off by this; it's not a book written to make you cry, but to explore the notions of afterlife, and afterdeath.)

The key to the success of this novel lies in the characterisation; each character is perfectly crafted, with a balance to everyone that lies somewhere between being sympathetic and enraging, complex and straightforward. The ways in which each family member reacts to the death are at times questionable, at others infuriating and always understandable. Seabold paints a brilliant picture of grief embodying itself in different ways; one family member shuts down entirely, whilst another immerses themselves in their grieving, whilst another attempts escape through any means possible, and so on. The supporting cast is also brilliantly fleshed-out - Mr Harvey, the antagonist, is a vile character, made unnervingly complex by his background and Susie's insights into his life and past, whilst the boys who loved Susie and her sister, Lindsay, play a crucial role in the support of both girls, one alive, one dead. There are many other characters that I could speak of, as they are all crucial in their own way to the novel, but these aforementioned ones are the main carriers of the novel, the ones who power it forward and give it momentum - even though the events of the novel take place over the course of ten years.

Susie's Heaven is also a wonder; it's without religion, and is simply whatever your subconscious wants it to be. In Susie's case, Heaven is the high school in which she would have reinvented herself, without classes and teachers but with the good kind of swings. Her Heaven is full of little things designed to make her happy, such as products that are seasonal being available constantly, dogs in abundance, or 'riches in furry packages', as Susie terms them, and the good bits of fame - being in magazines and so on. However, it is a Heaven with limitations; until you can begin to let go of Earth, your Heaven cannot grow, and so Susie restricts herself initially by spending so much time watching her family, trying to connect with them. However, as the novel progresses, and Susie learns more about her family and the secrets of life, her Heaven correspondingly begins to expand, revealing more to Susie about life after death. This is probably my favourite version of Heaven that I've ever encountered.

One last thing: this is not a sad book. It is sad at times, yes, and disturbing at others, but most of all it is hopeful; whilst the book begins with death, it does not end with it, and is full of beautiful moments that remind you that ultimately, life does continue, and must be allowed to continue. I don't enjoy reading this book because it makes me cry; I love it - yes, that's right, I love it again - because, despite the horror, good comes out of it. Once you get past the initial assumption that this book is all about death, you'll come to realise that it is, in fact, about life, and how it must not be taken for granted - something which I think we all need reminding about, from time to time.
Posted by Jasmine to a T