Review: 'Miss Pettigrew Lives For A Day' by Winifred Watson

I mentioned this book in an entry I wrote for World Book Day, commenting that I would be reviewing it soon... Well, I've taken my time and finally gotten round to it. The reason for my pause is that this is one of my favourite books of all time, and I wanted to ensure I did it justice - something which I am now going to attempt to do. 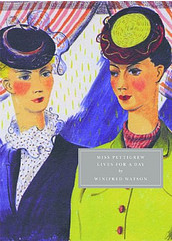 Miss Pettigrew Lives For A Day is a novel that focuses on a character who has almost reached the bottom of the barrel; Guinevere Pettigrew is a hapless, middle-aged, unsuccessful governess who is unable to hold down a job - time and time again she returns to her agency for jobs of decreasing prestige. She finally acquires an interview for a post with a Miss LaFosse, an interview which she must succeed in, or suffer eviction (it sounds pretty depressing so far, but you have to stick with it, because it is crucial that the reader is aware of just how much trouble poor old Miss Pettigrew is in, or nothing that follows will have the same impact). Feeling utterly dowdy, downcast and lacking even the merest scrap of confidence, it is with a heavy, anxious heart that Miss Pettigrew approaches the door of Miss LaFosse, expecting a brisk, no-nonsense matriarch to open the door, and promptly slam it back shut. What she encounters instead is a glamorous, flighty minx of a woman with a man in her bed, another coming round to visit and no end of despair for the fix she is in. Miss Pettigrew gets caught up in the whirlwind that is Delysia LaFosse's life, and embarks on a day that is to change her world forever.

Set in the 1930's and told over the course of a single day, with each chapter divided into unequal portions of time - forty-five minutes here, two hours there - it follows Miss Pettigrew as she becomes assimilated into the luxurious, decadent life of Miss LaFosse and her associates. I've recently become a bit of a fan of these types of novels - stories that are set in a long-gone era where women wore evening gowns, men wore suits no matter what time of day it was, and everyone wore hats if they left the house - The Great Gatsby by F Scott Fitzgerald, The House At Riverton by Kate Morton and so on. Miss Pettigrew Lives For A Day fits perfectly into this genre; there's darstardly men, cigars, sherry at eleven in the morning, flowers for button-holes, nightclubs with waiters, pianos and singers, corsets... everything one could associate with those bygone times and classes where the men are all brash and bold, women are coquettish and flighty and no one cared much for the consequences of their actions, if they were rich enough. This in itself is glorious enough about the novel; it's sheer escapism to a time where life seemed simpler and, from my point of view, a lot more fun.

This, however, is not the main attraction that the novel holds; this honour goes, of course, jointly to the two female protagonists, both resembling two versions of women that are recognisable to all. Miss LaFosse is the confident, happy-go-lucky beauty with all the odds in her favour, whilst Miss Pettigrew is the nervous, unhappy mouse with all the confidence of a ripped paper bag. As the relationship between two women at opposite ends of the spectrum develops, we begin to see how they need each other, and how they begin to feed the better parts of the other, whilst pruning back the more unpleasant aspects of their personalities. For example, Miss Pettigrew helps Miss LaFosse to escape the clutches of a rogue who's no good for her, and swap him for the ideal man. Miss LaFosse, meanwhile, helps Miss Pettigrew discover confidence in herself through the time-old, fail-safe remedies of uniting against men and a make-over. Miss Pettigrew becomes the mother-figures Miss LaFosse needs, whilst in return, Miss LaFosse becomes the best friend Miss Pettigrew has been missing all her life.

It's a story that is unashamedly positive, and this is why I love it; even though Miss Pettigrew begins the book as - to use the age-old metaphor - an ugly duckling, she is well on the way to being a swan by the end of her day of living. It's a fairytale in the most traditional sense of the word; there's a fairy godmother, a handsome prince of a man, a villain and a happy ending. Better yet, this formula is used twice, for both Miss LaFosse and Miss Pettigrew, so you get two fairytales running alongside each other, for the price of one. As a pick-me-up, it doesn't get much better than this; it restores your faith in good fortune and good people, and personally, it makes me hopeful for such a day when all my fortunes turn around... that's not to say I'm not fortunate, but let's face it, there's a part of everyone's life that you wish a fairy godmother would come and wave her wand over!

I must confess that I acquired my copy of this book through illicit means; I actually 'borrowed' it from my sister, and never quite got round to returning it - and I probably never will. When I took it, I was just looking for something to while away a three-hour train journey; what I got instead was one of the friendliest, feel-good, most well-written books I've ever read; the characters are well-rounded and believable, the settings are enchanting, the dialogue is hilarious and the whole plot is, whilst simple and another version of the Cinderella story, original enough to be forgiven for it's borrowed plotpoints. It's nostalgic, romantic and brazenly shallow in places, but so enjoyable you'll revel in the scenes that wouldn't look out of place in a modern chick-lit. Boys may not be interested by such a book, but honestly guys, it's so much fun you're missing out. I just wish more people knew about it.
Posted by Jasmine to a T