Review: 'All My Friends Are Superheroes', by Andrew Kaufman

A while ago, it started to dawn on me that books I love were being adapted into bad films; for example, the adaptation of Philip Pullman's 'Northern Lights' (or, 'The Golden Compass' as it is known on the other side of the pond and in Movieland), in which Chris Weitz removed religion from the plot of the film and just referred to an ambiguous, all-encompassing authority - which completely defeated the object of the entire 'His Dark Materials' trilogy. Meanwhile, the adaptation of Alice Seabold's 'The Lovely Bones' was overshadowed by Peter Jackson's visions of heaven, and how much fun he could have with the special effects. Whilst I'm sure that, to others, they were enjoyable movies, by the time I got to see them I knew the novels almost by heart, and so was bitterly disappointed when I saw what a hash Hollywood had made of them. Consequently, 'All My Friends Are Superheroes' is a story that I really, really hope is never made into a film.

I can't really explain what it is about this book that I love so much; there are so many things that make me happy when I read it. I guess the first and foremost thing is, of course, the story. 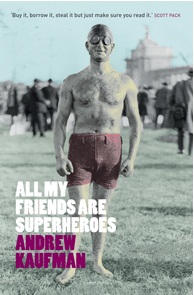 The story is about a man called Tom. Tom is your average bloke, who happens to be married to a superhero, The Perfectionist. In fact, he is the only 'regular' guy in his group of friends, in that he doesn't have a superpower of any kind - he can't time travel, or calculate the net worth people on the street, or absorb the stress of others....In fact, the only thing irregular about him is that he is invisible to his wife, and only his wife, as her ex-boyfriend (the cleverly-named Hypno) hypnotised her to never be able to see him. He has only one aeroplane flight in which to convince her that he is real, before she uses her superpower - the ability to make everything around her perfect - to move on and start a new life. The main drive of the plot is centred around his recollections of their relationship, the realisation that she is entirely oblivious to him, and his attempts to persuade her of his existence. It is a beautiful ode to love. Tom is utterly convinced that he can appear to his wife again, and tries with increasing desperation to reveal himself to her. Meanwhile, the scenes in which The Perfectionist believes she is living alone after Tom's apparent disappearance is quintessential of a person struggling to move on after a relationship; she mopes, rationalises, persuades herself that he will come back if she completes certain tasks, and eventually tries to escape the memories of him.

Then, of course, there is the fact that it is set in an alternate reality where there are superheroes! Well, superheroes might be a bit of a stretch - the general perception of a 'superhero' is  a costumed wonder-person who uses their special powers for good: these ones, though, are as normal as a person with a superpower can get, in that they don't really do anything with their powers (superpeople might be more apt, but it doesn't have the same ring to it.) One of the more central characters to the plot, The Amphibian, is a bike courier, because 'he can survive on both land and water , but really, what use is that? Who's going to give him a job for that?' (Actually, I came up with a few - retriever of golf balls from lakes, diver, swimming pool cleaner, like Tom... But I suppose that ruins the magic a bit). If anything, some of the superheroes seem a bit weary of their powers - The Ear, for example, always stuffs his ears with cotton wool because, as you may have guessed, his hearing is so sensitive he can't bear it. This is a strange quality of the book - the superheroes of this novel just don't consider themselves special, because they've all got a superpower of some sort, and in a strangely fitting way, it makes the novel more special; it highlights how people tend to underestimate their own talents, and shy away from using them.

The way the peripheral superheroes are introduced is a also a bit different; some are part of the main plot, such as The Ear, The Perfectionist, Hypno and The Amphibian, but others are just 'thrown in' as a representative few of many examples of superhero there can be, such as The Businessman, The Dancer, Mistress Cleanasyougo... They are all introduced via intervals in which a list of other superheroes are detailed, with the basic breakdown of their power, how they use it and how it affects their lives. These brief hiatuses add background to the world in which the story is set, whilst also amusing the reader. I myself was particularly impressed by Falling Girl, who's special power sounds suspisciously like my own issues with gravity... 'A small sample of things she's fallen from include trees, cars, grace, horses...' and so on.Then there are the briefest of chapters - barely a page long - discussing how one might discover themselves to be a superhero, or how supervillains don't really exist, which all add to the gently amusing tone of the book, giving explanations and arguments as factually as if you were reading a textbook.

There is, as you might expect, an element of magic to this novel - I mean, you've got the superheroes, you may as well take the fantastical side a bit further, right? - which just further increases the all-round loveliness of the story (I'm running out of adjectives for lovely by now, but the book really, really is just that). One of my favourite scenes involves an encounter with an Anxiety Monster, which is not only actually quite terrifying, but personifies perfectly the feelings you get when you are incredibly nervous, or anxious, and indeed does it so well that I found myself half-wondering why I'd never seen one before. It's little touches like these that Kaufman has added that turn this into... (I don't want to use the phrase, I'm using it too much in this blog, I'll get typecast....) Oh, alright, a modern fairytale. There, I said it. But that's what it is! It plays on the childlike love of having a superpower, vanquishing monsters, fighting for the love of your life, whilst coupling it with realistic aspects of adult life, the kind you didn't consider as a child: jealousy, lost love, jobs, burglary, fights. You're allowed to feel that same innocent joy you might've felt with Cinderella, whilst also nodding wisely at how real life isn't all fun and games.

I guess I might as well just come out and say it; I love stories that are like fairytales for grown-ups, because I don't see any reason why the kids should get all the good ones, and this is one of the best I've come across. It's sharp, clever, poignant, romantic without being sentimental, fantastic whilst retaining elements of realism. It's a short story - barely a hundred pages long - but strangely, I didn't feel disappointed when I reached the end; instead, I was glad it was so short, because it means I can read it in one sitting, should I ever need a quick pick-me-up on a dark day. It's witty, but not funny in a laugh-out-loud kind of way: whilst you may never chuckle while you're reading it, you'll be smiling for hours after you've finished it.
Posted by Jasmine to a T