Knife, Lights and Spyglass: His Dark Materials and Me

Northern Lights (or The Golden Compass to anyone Stateside), the first book in Philip Pullman’s His Dark Materials trilogy, is twenty years old this year. TWENTY. That, to me, is incredible – firstly, that that much time has passed, and secondly, that I didn’t even realise it. I only clocked it because I saw a hashtag on Twitter about a month or so ago (#NorthernLights20), clicked the link and there it was… people discussing the 20th anniversary of one of my most favourite books of all time, and I hadn’t even noticed.

I could argue here that it’s because Northern Lights is a timeless, ageless book that transcends generations, and so applying an age to it is a meaningless number, blah blah blah – but that’s bollocks because you could say the same about Margaret Atwood’s The Handmaid’s Tale, which is thirty this year, and I was marvelling at that anniversary in February. No, the truth is, His Dark Materials no longer matters to me as much as it once did, and so the arrival of such an anniversary caught me completely off-guard. Yet I’m kind of glad – the shock has suddenly sent my mind whirring, remembering just what it is about this series that I fell in love with.  Fair warning: some spoilers to the series, including details about the ending, will come out in the course of this post.


It’s not often that I remember how I acquired books – for example, To Kill a Mockingbird may as well have grown organically onto to my bookshelf one day, for all I remember about buying it. I don’t even remember reading it for the first time, not really. But I DO remember that I got Northern Lights and The Subtle Knife for Christmas 2000 (partly remembered because I quite clearly marked it in my copy, in naughties-tastic metallic pen, complete with circles over the i's). Actually, that’s not quite right – that year, my parents gave my sister Northern Lights and me The Subtle Knife, and when I sat down to start my book I had no idea that it was the second in a trilogy, or that my sister was in possession of the first. This meant that my first meeting with Lyra Silvertongue was the same as Will Parry’s – I was as unfamiliar with Pantalaimon, the Alethiometer, Dust and the many-worlds as he was, and I was utterly enthralled by it. Admittedly, Lee Scoresby’s storyline, and Serafina Pekkala’s, were parts I skipped over to begin with, because at that point I had no attachment to those characters and so their plots seemed irrelevant to me. Nevertheless, the strength of The Subtle Knife is that (even though it’s now my least-favourite of the trilogy) I enjoyed it whilst under the impression it was a standalone novel – even with all the questions I had about the worlds and Lyra. In fact, reading the novels out of sequence only strengthened their impact in the end: nearly all my questions from The Subtle Knife could be answered by Northern Lights, and my attachment to Will was increased by my first experience in the various worlds being through his eyes. Even though I read the books completely out of order - Knife, Lights, Spyglass - it didn't matter, because this is a story beyond structure.

So why did His Dark Materials matter so much to me? Well that’s a tricky question, so let’s start with the obvious, easiest, shortest answer: it’s a great story. A young girl sets off to the far North of the world to rescue her best friend, accompanied only by her daemon, Pantalaimon, the animal embodiment of her soul. On her quest she encounters monsters, a kingdom ruled by a despot and a lab conducting unspeakable experiments on children. She makes incredible friends and discovers terrible truths. There’s intrigue and murder and fights, and she meets talking bears, ages-old witches, Texan balloonists, finger-sized humanoids and distant father-figures. Pullman’s world – Lyra’s world - is Narnia, Hogwarts and Oz rolled into one, with a sprinkling of Stephen King.

Those characters she meets, the bears and witches and Texans – they’re another reason the trilogy is so fascinating. No one is perfect in Lyra’s world, and that’s a strong message to send to impressionable young people. Grey character casts have become increasingly popular in recent years, the most famous being the sprawling crew of A Song Of Ice And Fire by George R. R. Martin, where little girls can become murderers and men lose their lives for being honourable. But what I've now realised is, His Dark Materials has the same - and Northern Lights predates A Song of Ice and Fire by a year (A Game Of Thrones was first published in 1996). No one in His Dark Materials is purely good, or without conflicted morals - Lyra famously survives throughout much of the story by lying through her teeth; Will kills a man within his first chapters; Stanislaus Grumman breaks a promise he made a dying man; Lee Scoresby murders thirty men to save one. Even Iorek Byrnison, the bear-king who can talk with humans but can't empathise with them, finds himself conflicted over the fate of the world he lives in. That’s a powerful thing to read when you’re a young girl - that the world is not black and white, that sometimes doing bad things or telling lies doesn't necessarily make you a bad person.
Then of course, there was the Homeric feel to Lyra and Will’s journey through the worlds. As a teenager I hadn’t yet become acquainted with The Iliad and The Odyssey, but as I got older I realised that Pullman had littered his work with allusions to Greek mythology and Homeric epic. Take, for example, the Land of the Dead in The Amber Spyglass: it’s basically Hades and, if you know your mythology, you’ll know that Greek heroes frequently made trips down to retrieve lost loves or seek counsel from the dead – just like Lyra and Will. Then there’s the Land of the Dead itself. See, the Greek underworld was never a pleasant place, like the Christian Heaven is purported to be: it had nice corners, sure, with the Elysian Fields and the Isles of the Blessed for particularly worthy souls, and Hell-like counterparts called Tartarus and the Fields of Punishment where, if you were evil, you were punished accordingly. However, if you just happened to be a normal person who didn't do anything particularly evil in your life, but never did anything particularly good either, you ended up in the bleak Fields of Aspodel, a dull wasteland where souls spend their eternities doing nothing. All of this was separated from the mortal world by the river Styx, the domain of Charon, ferrier of the dead. Pullman's underworld could be the Fields of Aspodel – it’s an endlessly empty landscape, grey and flat and full of souls without anywhere else to go on to. It even comes complete with a boatman, who ferries the souls across from the living world to the Land of the Dead. And all this is in addition to the shape-changing daemons, who are souls manifest in Lyra’s world but messenger-spirits in mythology, or the Harpies, the half-woman half-bird hybrids who torment Lyra just as they once tormented blind Phineas, the seer. And they're probably the tip of the iceberg -there’s undoubtedly loads more allusions if I could care to scour for them.

The ending of the series also taught me a powerful lesson: that sometimes the right endings are not necessarily happy ones. The first time I read The Amber Spyglass, by the time I finished it I was in floods of tears, and even now – fifteen years later - there are some passages that will still cause my face to crumple. This is because Will and Lyra, the children who saved the worlds, suddenly find at the end of it all they have fallen in love, but just as they realise this - just as they recognise their souls match - they are informed that, in order to maintain the new equilibrium they have created, they must separate forever, with Will to live in his world and Lyra to live in hers (I'm not going to explain exactly why because that will take forever). There are no loopholes, no compromises: they must give up the love of a lifetime, with the only comfort being that they might find each other in the Land of the Dead again, and that in the meantime they will share a bench across worlds for one hour, one day a year. Their final parting is desperately poignant, and yet there is no avoiding that this is the best course: Will and Lyra sacrifice each other so they can both live strong, healthy lives apart, instead of a short and sickly one together, and in doing so will also save all the people across all worlds from having to endure the unending misery of the Land of the Dead again.

Quite frankly, I could go on forever like this, and never quite manage to make my point over what an incredible series of books this is: it’s an adventure story at it's core, but with huge emphasis on both politics and religion, which you don’t often encounter in children’s literature (at least I don’t). It's sprawling, covering several different worlds yet somehow never confusing them, and the imagery used to describethem is rich and satisfying to read. It boasts a huge cast where, somehow, everyone is memorable,well-developed and unpredictable. It covers all the definitions of love you can think of - maternal, paternal, passionate lust, first love, vocational, friendship – and how it affects everyone, regardless of how they started out. When I read it as a teenager, I saw it only as an adventure in a world akin to Narnia or Hogwarts. As I grew older, however, I came to recognise the powerful, controversial subjects it brought up and questioned, which enriched the story and deepened my understanding  and appreciation of it. I don’t know why I forgot about this series, or why it fell out of favour, but I’m so glad that the Northern Lights anniversary reminded of it with such a jolt: it’s made me truly think about what His Dark Materials means to me, and has made me realise that, of all the books I’ve read, all the fictional worlds I’ve visited and all the characters I’ve met, Lyra and Will have influenced more than any other. 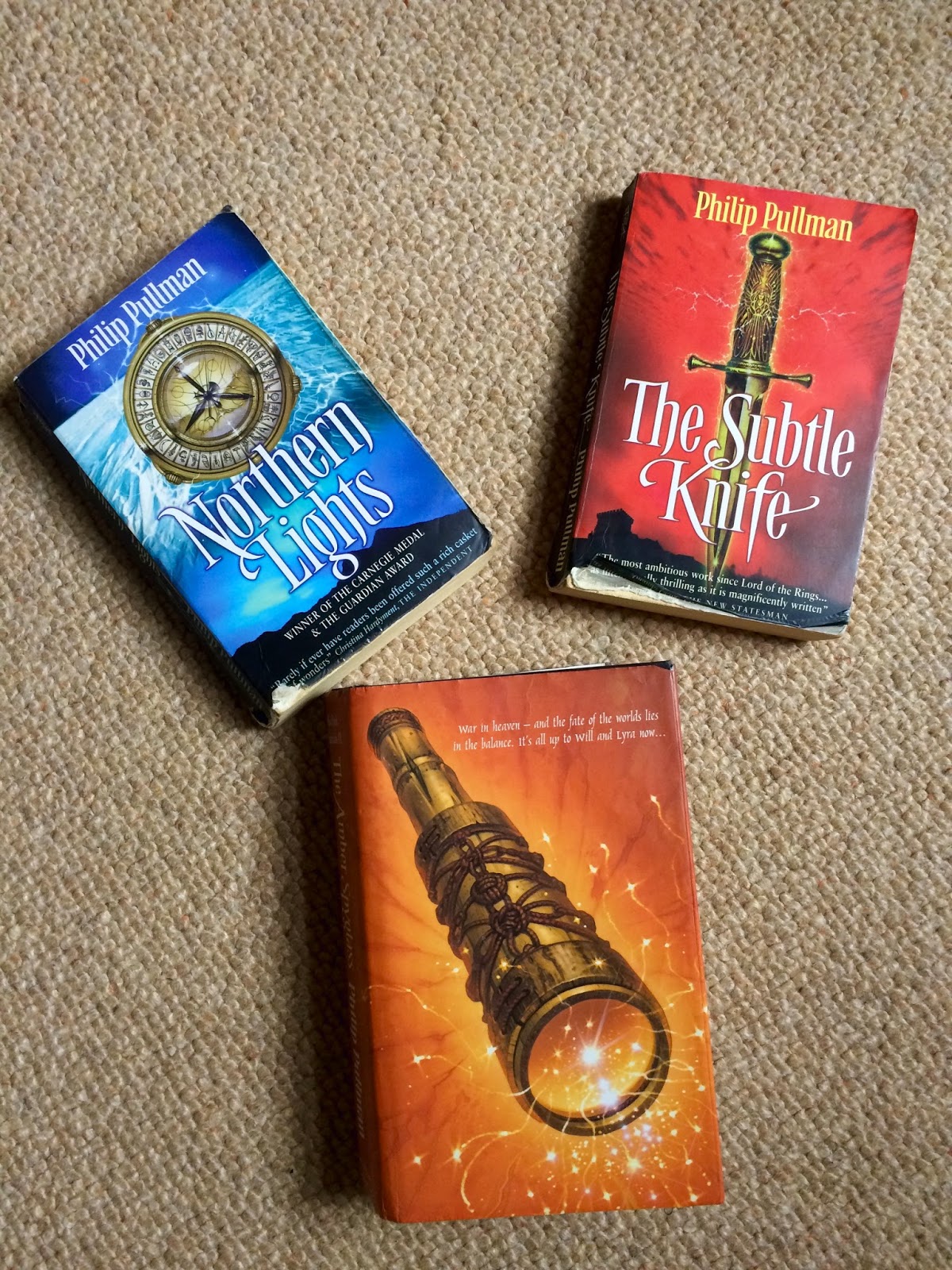