As I was once taught by Merlin in Disney's The Sword the Stone, opposites make the world go round, and having shared my best reads of 2015 with you last week I can only restore balance by telling you the ones I did not enjoy. It's a shorter list than last year so I've obviously chosen my books more wisely this year, but just as controversial in some places...

The Catcher in the Rye by J D Salinger (1951)
I’m probably going to get a lot of stick for this, I know, but the truth is, I didn’t like it. I read the whole thing, and came to the conclusion that – as I have always suspected – I read this at least 10 years too late. On one hand, I could sympathise with Holden’s fear of the unknown, his desperation to be taken seriously as an adult, his nostalgia for childhood. On the other, I found him whiny and a constructor of his own misfortune. Maybe he reminded me of me as a teenager, and that’s why I didn’t get on with it: perhaps I recognised too much of my teenage self in Holden, and didn’t like what I saw. Or maybe he was just a really annoying, moody little so-and-so with too much entitlement and not enough compassion for anyone besides himself and Phoebe, I don’t know. But sorry, Caulfielders – I’m not a fan. I am, however, a fan of this tweet: 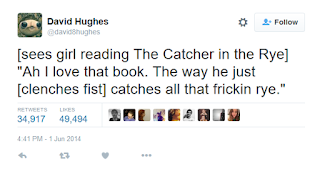 Second Life by S J Watson (2015)
This was the first of several disappointing books in 2015, particularly given Watson’s shocking debut Before I Go to Sleep, which was nigh unputdownable and still gives me the willies. Naturally, after reading such a stonking good thriller, I was pretty excited about getting my hands on a second offering. However, this tale of a woman investigating her sister’s murder quickly became bogged down in unnecessary red herrings, difficult-to-follow twists and unremarkable, unlikeable characters. The biggest crime it committed though, was to be forgettable: there was nothing, in my opinion, that made this book stand out for any reason – so much so, I had to look up the blurb in order to remind myself what the book was about. Hardly a glowing recommendation.

The Girl with the Dragon Tattoo by Stieg Larsson (2005)
Before I get into my reasons for including the immensely popular The Girl with the Dragon Tattoo on my Worst-of 2015 list, I just want to say two things: firstly, I enjoyed a lot of this book. Secondly, it was my first audiobook, and I struggled a bit with the format, which I admit did have a negative impact on this book. Now that’s out of the way, I can get onto my main disappointments: for example, the very gripping and interesting main story – of Blomkvist and Lisbeth Salander’s investigation into the messed-up Vanger family – was buried into the middle of the book, flanked on either side by a lot of filler. The first third was spent establishing that Blomkvist was a rogue journalist who had been out-manoeuvred on a damning-but-unprovable article he’d written, and that Salander was as messed up as she was proficient in hacking. I’m no writer, I’ll be the first to admit, but I don’t think it should take a third of a book to establish your principle characters. Then there was the bizarre ending that took up the last third – obviously Larsson was setting up for another book, but it took a long time to wrap up and involved what seemed to be a very un-Salander-esque act that jarred with how I knew her as a character. Finally, I took umbrage with a ‘character-building’ episode involving Salander. It was, in my view, entirely gratuitous and yet another example of an author using assault as a means to show the strength or courage of a character, whilst simultaneously cementing another’s evil. I recognise it's important to discuss rape and not shy away from it in media, but in this case it just came across as a vehicle to demonstrate Salander's strength and difficult life, and having her brutally attacked can't be the only way to do that.

We All Looked Up by Tommy Wallach (2015)
The premise of this YA novel was, to me, promising: when the news breaks that an apocalyptic meteor has a 30% chance of hitting the earth, five teenagers re-evaluate their feelings towards life, love, friends and family as they deal with the possibility they may soon all be dead. It should be a refreshing take on what can be viewed as a tired genre – most apocalypse novels tend to focus on the immediate aftermath, with some stretching a bit further forward, sometimes leaping back, but this one focuses solely on the weeks running up to the will-it-won’t-it meteor either hitting or missing the planet. However it quickly devolves into now-or-never romances, parental rebellion and general sticking-it-to-the-man. I don’t really know what I was expecting, but I had hoped it would be a bit less John Green.

The Girl in the Red Coat by Kate Hamer (2015)
The third in my little triumvirate of 2015 Disappointments, this was a huge one for me - I was looking so forward to it, so maybe (as I've done before) my expectations were just too high. I won’t go into too much detail here because I already reviewed this, but essentially I felt this story of a young girl kidnapped by a man claiming to be her grandfather posed too many questions that went unanswered.