I’ve been pondering the idea of using audiobooks for some time now: I’ve never listened to one before, and when I was younger they came in clunky cassettes boxes, usually with several tapes if the book was a long one. They seemed to be aimed at older people who had vision problems and couldn’t read a book – certainly not for me. But the rise of digital media has pulled audiobooks into the limelight, with companies such as Audible regularly touting their wares on public transport, aiming them at people too busy to read, or those who travel on routes that are so crowded that holding books, Kindles or papers are near impossible. It was actually an advert for Audible – ‘first 30 days free trial’ – that finally pushed me over the edge. I’d been so reluctant, after all, about ereaders, and yet now I’m seldom without mine, so who’s to say audiobooks won’t be a similar revelation? I decided to take Audible up on their trial offer.

First things first: I needed an Audible account. This was terrifyingly easy to set up because it’s an Amazon company so, naturally, I could sign in under my login for that site. Everything – including payment details – was transferred without a hitch. So far, so 1984. That unnervingly simple step out of the way, it was time to choose my one free audiobook, as per the terms of the trial offer – but hang on, I thought the offer was a 30-day free trial? Doesn’t that mean I get as many free audiobooks in a month as I want? Actually, no: the slightly confusing bit about Audible is that (as a card-carrying member) you pay a monthly fee of £7.99, and for that you get ONE free audiobook a month; after that, you have to pay per audiobook you download. My free trial meant I didn’t have to pay the monthly subscription fee this month, but would still get a free audiobook. Once that had been cleared up – and chalked up as a bit cheeky, but understandable, particularly from an author’s perspective – I continued on to my selection process for my free audiobook. 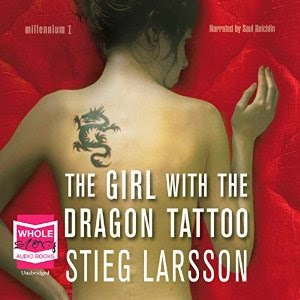 Another slight hiccough: it seems the free audiobook is taken from a chosen selection – mostly bestsellers, which is good, but I had been under the impression I could choose any that I wanted. I might’ve been less cranky about that if I hadn’t read most of the titles on offer already, and I thought my first audiobook should be one I’ve never read before. Eventually I settled on The Girl With the Dragon Tattoo by Stieg Larsson (narrated by Saul Reichlin), which everyone has been telling me to read for ages but I’ve never gotten round to. It was at this point I discovered yet another issue – ish – with Audible: if it wasn’t free for me this time, the audiobook of The Girl With the Dragon Tattoo (unabridged) was about £25. Now, I understand that there are additional costs involved in creating an audiobook – hiring voice actors, recording studios, etc – so I was expecting it to be higher than the ebook or print, but considering Amazon currently have the paperback available for £3.85 (discounted from £8.99), 25 quid seemed a bit steep. If I wasn’t getting it for free, I definitely wouldn’t have bothered. That’s not because I don’t think the book itself is worth it, but £25 is a bit out of my price range for a print book or ebook, and they’re formats I’m already very comfortable with.

You’ve probably surmised (correctly) by now that I had a few misgivings with Audible, but I figured Audible wasn’t my only source for audiobooks, so I could always take my custom elsewhere if I decided I liked the format: so far, my only qualms were with the service, not the product. However, I had some issues with the audiobook too.

Firstly, I’ll be honest: I overestimated my ability to work and listen at the same time. I started listening to The Girl With the Dragon Tattoo during work, assuming I could merrily work away whilst listening the story. That was not so, as may well be obvious to you – I found that I kept tuning out the dulcet tones of Reichlin so I could concentrate more on the task in hand. I only even noticed I was doing this when I suddenly realised the narrator was reading, ‘in hindsight, this was a mistake’. WHAT WAS THE MISTAKE?! I’d completely missed what could well have been a crucial plot point. In a print or ebook, if I’d skim-read the page, or zoned out for a moment, I could go back and re-read the passage again – but with an audiobook, it seems really difficult to replay a specific passage. Even when I left work and entered the realm of the relatively mindless – i.e. my commute – I struggled to concentrate, because external noise kept drowning out the narrator, even with the volume turned up quite high. Buses speeding past, mopeds, even the beep-beep-beep-beep of a pelican crossing all managed to drown out words and passages. So I can’t listen at work because I’m, well, working, and I can’t listen on my commute because my surroundings are too noisy. When CAN I listen to it?!

I also had not anticipated how long an audiobook would be – The Girl With the Dragon Tattoo is about 18 hours and 50 minutes long. Being the nerd I am, I did some maths on how long it would take me to get through in other formats – feel free to correct me if I’m wrong because maths was never my strong suite at school!
So based on that (possibly hairy) maths, providing I didn’t dawdle, it would take me roughly half the time to read The Girl With the Dragon Tattoo than it will to listen to it. If it would be far quicker – and more enjoyable – for me to read, then why am I even bothering? Because, despite all my misgivings, I am enjoying the story itself, which – so far – is quite gripping, when my environment permits me to be gripped. It’s slightly annoying though, because now that I’m getting quite into it, I still don’t know if I want to continue listening to it, and me being me (also having missed a fair bit through not paying attention), I think I’d have to re-read it from the beginning once I procured a copy. And I know I got it for free, but there’s still that niggling thought in the back of my head that as I already own this in one format, why should I buy it in another unless I really love it – which I won’t know for certain until I finish it? Talk about a dilemma.


I suppose it all comes down to one big disappointment: audiobooks are not something you can multi-task with. I had visions of me being able to spend an entire day at work, listening to a great story whilst I went about my daily business, but this is not so. Audiobooks require as much attention as reading a print book or ebook. If you’ve ever tried reading at the same time as trying to do something else, you’ll know that one or the other will suffer – either the pan boils over, or the hoovering doesn’t get done properly, or you walk into someone on the street, or you just put the book down. I thought audiobooks would be a way to experience a novel without encountering those kind of issues, but it now seems that, if anything, it’s actually easier to be distracted away from an audiobook. This begs the question: why listen, when you can read? I’ll probably stick with The Girl With The Dragon Tattoo on audio for now, see how I get on and if my opinion improves, but – with 15 hours and 30 minutes still to go – I’m not sure anything will change.
Posted by Jasmine to a T