Best of the Books Part Three: The Snow Child by Eowyn Ivey

It's been a very good year for books - not all of them have been published in the last 12 months, but I've read some crackers in 2013. Admittedly, I've also read some shockers, but for the most part, I've enjoyed almost every book that came my way. However, my end-of-year list is reserved for my absolute favourites, so I've had to be a bit pickier than I normally am, but that doesn't mean I want to ignore all those other books I loved. So now, before I go into my review of my best book, I'd like to make a mention of a few that almost, but didn't quite, make it into my top ten:


So, with the honourable mentions out of the way, I'd like to round off my Best-Of list that started with Rules of Civility and was almost topped by Gods Behaving Badly, by presenting to you my absolute favourite read of 2013: The Snow Child, by Eowyn Ivey. 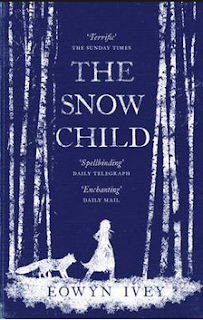 I must confess, there was never really another contender for the top spot of this list: The Snow Child simply amazed me when I first read it in March of this year, and has hovered in the back of my mind ever since. It's set in the 1920's and is about a middle-aged couple, Jack and Mabel who, after burying their stillborn baby, move to Alaska to start afresh. When we join the couple at their new homestead, they are struggling; Jack is doubting his ability to farm the land, and Mabel fantasises about disappearing between the ice of the nearby river. It is not until they are befriended by their nearest neighbours, the sturdy, brash Bensons, that life becomes possible, and it is not until the mysterious child Faina appears on their doorstep that life becomes worth living. But who is the child who came to them on the night of the first snow, and what will become of her in the summer?

At first it was hard to put my finger on what I loved so much about this book, as there is so much to enjoy. The language is beautiful, with descriptions of landscapes and people being neither too flowery nor too vague; you learn enough about them in time, as you would with any relationship. There's a touch of humour to it as well: Esther Benson, the kindly, larger-than-life Alaskan farmwife provides a lot of the earlier warmth that the novel lacks, whilst a few sweet moments - impromptu snow-angels and snowball fights - take the edge off a bleak first third. However, it was the raw, feral beauty of the Alaskan setting that really caught me: the way in which the suffocating nature of snow and the claustrophobia of winter is portrayed is remarkable, especially to a town-mouse like me who has never really experienced that kind of extreme weather.

There is also the way in which Jack and Mabel rally to their cause, with their mysterious foster-daughter and the kindly Bensons, that makes this book a joy to read. The novel has it's dark moments - Mabel's recalling of the days after her child dies is harrowing, and sometimes I found myself frustrated with the setbacks the couple encounter - but that, I suppose, is the nature of life; not everything is plain sailing. Having said that, for the most part the story is a tale of love, family and triumph, and despite it's cold physical setting, it is a novel to warm the heart, and one that will stay with you long after you close the book.
Posted by Jasmine to a T