So ever since I got a Kindle, I've been finding myself increasingly reliant on a good title; previously, I would've made some kind of judgement based on the cover (because let's face it, who doesn't?), but the issue with that and my Kindle is that it's all in black-and-white - usual tell-tale signs of books that I won't normally like (candy-colours, skinny women in heels, etc) are less obvious, and the description of the book is less accessible than on a print title. Of course, when shopping on the laptop or phone, it's far easier to see what the cover looks like, but it's still in miniature - subtle details are easily missed. A good example of this is Honeymoon for One, a book I read on holiday which features in the corner a bloody steak-knife stuck in the sand. Now, when I downloaded that book, I completely missed that little sign in the corner, so when I read it, the murder came as a bit of a surprise. Had I seen the full-size cover - say, in a shop - I might have spotted it. That's not to say it was an unwelcome surprise; on the contrary, it turned a run-of-the-mill chicklit into something a bit darker, and subsequently more interesting, but I think I would have been a little less dismissive of the book had I been aware of that plot point to begin with.

The point I'm slowly rambling towards is that, now I am purchasing more ebooks than print books, titles have greater importance to me. A good title will give you an inkling of the kind of story you're going to get - Murder in Deathsville, for example, would clearly be a crime novel, whilst Love In A Cake Shop is bound to be a chick lit (and an awful one at that). So on that note, here are some books that I think are wonderfully titled; some I have already read, and the rest are on the to-read list. 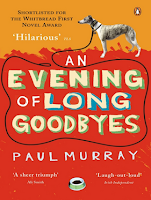 An Evening of Long Goodbyes by Paul Murray
Status: Read
I love this title because it sounds so poignant. It trips off the tongue quite nicely and hints at a melancholy, bittersweet story, possibly involving some kind of sad ending for a pair of lovers, or the inevitable demise of a family member. As a matter of fact, the name is shared with a greyhound in the story who does particularly badly at an ill-fated night at the dogs for the main characters, which include an uncouth van man, a flamboyant and woefully inept heir, and his desperately miserable sister. It's a one of those books which is funny to begin with, but evolves into something far deeper, as so many of these kind-of-funny-with-a-serious-edge books do; it's a good story, but I have to admit it was certainly not the one I was expecting when I picked it up. Nevertheless, it's grown on me over time, and whilst I'll always be wondering about the novel I thought it was going to be, it'll be a long time before I part with it.

The Fault In Our Stars by John Green
Status: Unread
I don't know an awful lot about this book, beyond the rather funny-in-a-sad-way first chapter (which I read in the back of Green's other novel, An Abundance of Katherines), and that it's caused something of a twitterstorm. This is a title that sounds both hopeful and warning; to me, it seems to be a reminder of the danger in having dreams, whilst acknowledging that one must have them. I can't tell you why it gives me that impression - I suppose it's more than something to do with the fact that stars seem to be irrevocably linked with dreams, and whilst it's a beautiful title, it's a bit cynical and cautionary. I certainly picked up from that first chapter that the protagonist is a cynical person - but then, she's a teenager with incurable cancer and an oxygen tank, so I suppose she has every right to be. Either way, the title caught my attention every time I saw it on a billboard or in a paper, and that first chapter has cemented my desire to read it.

And The Mountains Echoed by Khaled Hosseini
Status: Read
Khaled Hosseini is the master of poetical language; I've read two of his three books now (the other being the just as well-titled A Thousand Splendid Suns) and throughout both I found myself marvelling at his command of language. This, his latest offering, follows the lives of two siblings from an early age, right through to late-middle age, across three continents and with a host of supporting characters that either hinder or help them on their way through life. The title reflects this: the idea of an echo reaching across the world and down through time is a beautiful one, and there has always been something romantic about mountains (to me, anyway). It is title that conveys both the timescale and the geography of the novel, but also hints at a desperation and sadness that maybe can't be overcome. It's a great book that lives up to it's epic-sounding title, and one of the best novels I've read this year, with an added mini-story at the beginning that wouldn't be out of place in a fairytale compendium.


INTERLUDE
You know, when I first started writing this post, I had no idea it was going to be full of such melancholy-sounding titles. I'm writing this now, having finished the bulk of the post, but I just had to come back to this point and say that I genuinely wasn't expecting such sad titles. I mean, I knew which titles I would write about, but having only really been thinking about them properly now, it's only just occurring to me that they all sound quite sad! But please don't stop reading - there's some cheery ones coming up, I swear.

This Is How You Lose Her by Junot Diaz
Status: Unread
Easily my favourite title at the moment, and I know nothing about the book. Well, I know it's a collection of stories, all linked together in some way, but that is it. Yet the title itself is o desperate, cautionary and vaguely menacing that I can't help but be drawn to it. I'm not a miserable person by nature; I mean, I am prone to get hangry (angry if hungry), and I've thrown some monster tantrums in my time, but mostly I love nothing more than laughing; it may sound stupidly obvious but I am genuinely happiest when sharing a joke or laughing at something. So despite what is clearly a recurring theme in this list, I don't feel a lot of love for sad books, and this, if anything, sounds like a sad book, with it's hint at not just loves lost, but relationships breaking down, couples falling apart. I've always been intrigued by the notion of what happens after the couple get together - basically, do they actually stay together, or does it all turn out to be a big mess? These are themes occasionally explored - Helen Fielding recently broke hearts of half the female population by revealing Mark Darcy is dead in the new Bridget Jones book - but I don't think they're looked at enough; romance is all very lovely, but what about fallout? That's what I think this book looks at, and that's exactly why I want to read it. 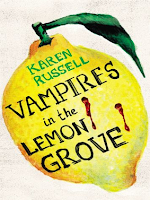 Vampires In The Lemon Grove by Karen Russell
Status: Unread
In acknowledgement of the slightly emo feel to this post, I thought I'd quickly try to turn it around with this quirky-sounding book that features vampires who own a lemon grove... yeah, pretty much all the details are there in the title, so there's no mistakes to be made here in that this is meant to be a humorous title. It does have to be said that this is a collection of short stories, not a full-length novel, of which the vampire story is only one. Nevertheless, it hints at humour, a touch of horror and fantasy, maybe a bit of a whodunnit - lots of themes to get stuck into. Personally, I just like the title because it's immediately jarring - how on earth would one find night-dwelling bloodsuckers in a sunny fruit farm? Then, of course, there's the absurdity of it - phrases such as 'spiders in the bath' and 'next doors' dog in the garden' are the kind of thing everyone has said at some point, so this title is taking that banal turn of phrase and turning it on its head. Whether it's a good or bad book, this title has been stuck in my head for about six months now, and I doubt it'll be getting out any time soon - even when I read it.

Never Let Me Go by Kazuo Ishiguro
Status: Read
Another saddish one I'm afraid; this tale of an alternate world in which children are reared away from parents for some initially unknown purpose is full of bittersweet nostalgia and the weary knowledge of adult life. It's another brilliantly-written novel, but my love of the title stems from the romance in it. Whilst the story itself is not fully centred on love, the feel of the title is that of a couple who desperately want to stay together - it's a heady, first-love, I-love-you-I-always-will-do-you-love-me etc thing to say, which echoes the childish nature of the first half of the novel, and the inevitable ending of the second half. I won't say any more, lest I give it away, but it's a desperately romantic title and one that has a sentiment to it that is often missing in most full books, let alone their titles.

1000 Years of Annoying The French by Stephen Clarke
Status: Read
Finishing on a cheerier note here - this is a non-fiction book, charting the often tumultuous relationship between France and England over the past millennium, and the contributing factors to each altercation we've had with our neighbours across the Channel. What I love about this title is how deliberately inflammatory it is - I actually bought it for a flight to France, and then barely read it on the plane because I was worried I might rile a French passenger. It also covers the bias in the book - obviously, the English come out on top in pretty much every historical point covered, whether it's a moral victory, or an actual one. I've read this book several times now and each time it's made me smile when I glance at the cover and think of the sheer pettiness of it - like the entire time, all we've been trying to do is wind up our Gallic chums, and succeeding at it to boot.


Well, that's it for now - if there's any titles you've always had a soft spot for, do let me know. I now love a good title almost as much as a good book these days.
Posted by Jasmine to a T