Review: The Penelopiad by Margaret Atwood 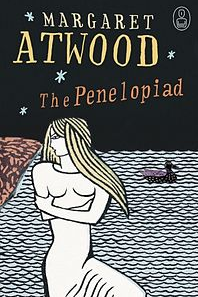 It's been a while since I wrote a full-blown review for a book and, if I'm honest, it's been a while since I've wanted to; I've read some good books lately, some great ones even, but none that have ultimately made me want to write about them at length. However, that particular dry spell ends today with The Penelopiad. Everyone knows the story of Odysseus' prolonged journey back from the Trojan War to his beloved Ithaca and wife; even if you're not familiar with the full poem, you'll know bits of it, such as his tussle with the Cyclops (probably his most infamous adventure). Not much, however, is written about his adored wife, Penelope, left to manage Odysseus' kingdom and bring up his son alone for twenty years, all the while resisting the unwanted advances of the greedy Suitors and praying for her husband's return.

As you might have guessed, The Penelopiad is the flip-side of Odysseus' story, following the young Penelope from her childhood in Sparta to her reunion with her husband after his many years away. Obviously, it can't be a direct retelling of The Odyssey because she wasn't there for most of it; any mentions of that side of the story are made in reference to the rumours she hears, which are cleverly juxtaposed with potential real situations that could have been twisted to become the myths they now are ('Odysseus had been to the Land of the Dead to consult the spirits, said some. No, he'd merely spent the night in a gloomy old cave full of bats, said others.') Instead, the story is actually about Penelope herself, and the infamous twelve maidens who, having ingratiated themselves with the wicked Suitors, were hung by Odysseus and his son, Telemachus, for their supposed crimes. So, instead of hearing boastful stories about slaying monsters and sleeping with goddesses, we get what in comparison probably sounds like a rather dull yarn; a wife, left at home whilst her husband goes warring.

Well, I have to admit, it's not entirely the complete opposite of that; the main characters don't exactly stray from type. Helen is as vain and shallow as you'd expect, and Odysseus is portrayed as being too clever for his own good  - as usual. I had hoped that Penelope would perhaps be portrayed a little differently; given that, during the time Odysseus is away she doesn't feature in the story, I thought there would be a bit more room to play with her character - flesh her out a bit more. Instead, she is still a loyal, wise, quiet character, easily dominated and overlooked by everyone else. The more interesting aspect of the story is actually in relation to the aforementioned twelve maidens; Penelope's relationship with them gives a more interesting spin on the story, as often the women in Homer's original poem are either harlots or goddesses (with, of course, the exception of the noble Penelope).This part of the story gives Penelope a bit more weight; suddenly, she's not quite so virtuous, and a bit more than the sobbing, mourning wretch we're used to seeing.

With the exception of the twelve maidens, there's nothing particularly new here; it's short story (I managed to read it in about an hour and a half, which is quick even by my standards), and given that the story is so well known, I imagine Atwood felt restricted by her source material - there's only so much you can do with a well-known legend. However, I couldn't help but compare it with the Troy trilogy by David and Stella Gemmell which, I will be the first to admit, is trash-fiction; yet the Gemmells managed to come up with reasonably believable twists on the Trojan legend to give their story a bit more oomph (example: Helen was actually a plain, shy girl, but in order for Agamemnon to legitimately wage war on Troy, he and Menelaus made out that she was the ultimate prize, thus leading to the whole Face That Launched A Thousand Ships persona). It wasn't easy for me to find myself comparing the likes of the great Margaret Atwood with what is, essentially, cheesy historical fiction, but I did feel that there was more that could be done with the story.

Nevertheless, I struggled to stop reading it; my daily commute involves about an hour spent on trains, and today I was treated to blissful journeys to and from work, in which the time flew by. Penelope's narration is wry, full of regret and yet also understanding; she's telling her story from the Underworld and during modern time, so she's had plenty of time to think things through. The careful mentions of modern culture and society also lend a fun edge; I always enjoy seeing historical figures in a contemporary context (Bill and Ted's Excellent Adventure is proof that it's a great idea). The chapters are also interspersed with messages from The Chorus, made up of the twelve maidens, recounting how and why they met their untimely demise through song, speech and occasionally little skits.

It's obviously a feminist approach to The Odyssey, but if you're the type of person to be put off by that, then try broadening your horizons for once. There are so many female characters in Greek myth, and yet they're so often pigeon-holed; they're either wives, victims or evil, and it's rare that we get their perspective. Penelope's character may not have changed much, but it is nevertheless refreshing to hear her voice, and as the story of the twelve maidens is one that barely features beyond a byline in the main poem (except as a warning against servants with ideas above their station), it's one that deserves a closer look. The story as a whole may not have wowed me in the way I expected, but there's just something about it that I know will pull me back more than once - and not just because I love anything to do with Greek myths.
Posted by Jasmine to a T