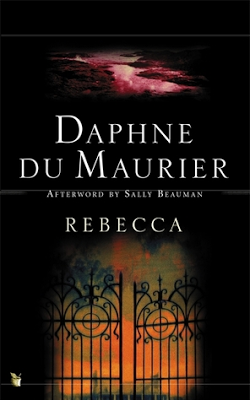 I recently compiled a list of the characters from literature that I hated the most - aptly titled, 'I Hate That Guy!'. One of the slots on this list is occupied by a certain Mrs Danvers, housekeeper of a manor called Manderley in Rebecca by Daphne du Maurier. Writing about 'Danny', as she is affectionately known in some twisted quarters, got me thinking about the novel as a whole, and I soon picked it up again, becoming absorbed once more in the claustraphobic world of Manderley, Maxim de Winter and his brides.

The novel follows a young, timid woman who, whilst in the employ of a tyrannical social-climber, finds herself romantically entangled with the enigmatic, older Maximillian de Winter. It's not exactly a whirlwind romance, but Maxim quickly proposes marriage and barely a few chapters in, our nameless heroine is spirited away as the new Mrs de Winter to his ancestral home, Manderley. Dreaming of an illustrious, sociable future as the new mistress of Manderley, de Winter's new wife little realises the horror that awaits her in her new home; for, whilst Maxim's first wife, the titular Rebecca, drowned in a boating accident nearly a year previously, her memory still haunts Manderley, assisted by the intimidating Mrs Danvers. What ensues is a battle of wills between Mrs de Winter and Mrs Danvers, as one struggles to escape the influence of Rebecca, whilst the other fiercely fights to keep her memory alive.

For those who believe this story to be a romance; don't be fooled. It's about as romantic as rock to the face. There are love stories, of sorts, but none of them healthy -  the first being Maxim's relationship with his new wife. It's an uncomfortable one, in which he treats her like a child, whilst she compares her love with him to that of a dog: 'I'm being like Jasper [the dog] now, leaning against him. He pats me now and again, when he remembers, and I'm pleased, I get closer to him for a moment. He likes me in the way I like Jasper.' The second love story - that between Maxim and Rebecca - is the one that dominates; Mrs de Winter paints several pictures of the idyllic, happy life that Maxim and Rebecca shared before her untimely death. Rebecca - who is named, over and over again, while the narrator never claims an identity - is portrayed as being the perfect wife, hostess, lover, friend, mistress and person, and subsequently everything Mrs de Winter the second is not. Rebecca is beautiful, popular, talented and beloved by all, and our poor narrator feels her shadow looming over her for much of the book, tainting her marriage with the constant comparisons that must be made between herself and Maxim's first, greater love. The final love story - that of Mrs Danvers' for Rebecca - is one of obsession; Mrs Danvers' grief over Rebecca's death causes enmity and strife for the young mistress of Manderley, who wishes only to be the kind of wife to Maxim that Rebecca was. As the novel progresses, these three love stories continue to clash and twist into an almighty mess that no one can escape from.

The general story itself is one of those which feels like it is constantly shrouded in a dark fog; an ominous air hangs constantly around the characters, tainting even the brightest descriptions with an ugly shadow. It's not an easy book to read in this respect; whilst it is difficult to put down once it has been begun, I felt constantly uneasy, as du Maurier consistently insinuates that there is something sinister peeping out from the dark corners of Manderley, and it is this feeling of being watched that makes it both a compelling and unhappy read. It's also difficult to find a character to root for; each has their benefits but, in the same way that the story has a dark cloud hanging over it, so do the characters; they are never without something to compromise a reader's allegiance.

Rebecca is easily the most likeable character for much of the book; as she is presented through Mrs de Winter's impressions, she is a vision of perfection and loveliness and, despite being dead, is the most memorable character of the novel (and not just because her name is also the title); it is easy to see why the new Mrs de Winter struggles to exorcise her memory and constantly compares her failures with Rebecca's triumphs. She is, in stark contrast, beige; young, easily intimidated, awkward, dowdy, unfashionable and - a key aspect to this otherwise dull character - innocent. For whilst Rebecca appears to be the perfect person, she is not an innocent; she is not without her sordid secrets. In fact, it is not until our unlikely heroine discovers one of these secrets that she begins to grow as a character, becoming stronger and less insipid. Maxim, on the other hand - the man for whose attention Mrs de Winter is constantly vying for - is a distinctly unlikable man. He patronises and ignores his young wife, causing her to believe he is still in love with the dead Rebecca, and behaves abominably selfishly throughout the novel. Why Mrs de Winter is so in love with him is a mystery - but as mentioned before, the love she bears for him is not one based on mutual respect and affection.

I'm never actually sure why I like this book; on paper, there's not really a lot to like in it, what with the dark subject matter of obsessive love, the twisted characters and the oppressive, looming presence of the house of Manderley. It's one of those books that I tend to read once, then not pick up for another year or two. There's something so uncomfortable about it that I find it hard to attempt on a regular basis. Nevertheless, when I do find myself reaching for it, the mystery of Rebecca, her relationship with Maxim and her death makes for the kind of story that keeps me reading into the wee hours. I'd never call it a satisfying book in that you know it won't end well - indeed, the first chapter clarifies quickly that Manderley is no more - but in terms of sending shivers up your spine, it's a winner.
Posted by Jasmine to a T