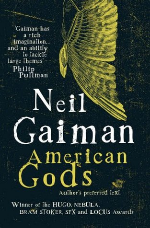 This was, quite possibly, the strangest book I have ever read. It was recommended to me by a few people after I reviewed the Troy trilogy, by David and Stella Gemmell, so I freely admit that, when I borrowed the book, I was expecting something, if not similar to a historical romp, at least in the same vague area (as it happens, American Gods is to the Troy trilogy what Anchorman is to Citizen Kane). One quick look at the blurb and endorsements, however, was enough to stop me in my tracks: the novel is described as 'deeply unsettling', 'some kind of miracle' and 'dark'. Immediately, I was intimidated. Here was a book that already felt like it was bigger than me, somehow, like it confronted issues and thoughts I could never dream of having. It gave me the same feeling The Grapes Of Wrath by John Steinbeck did: like I was going to embark on a journey that would force me to question things I've never had to consider before. I'd also noted that it was the winner of the Bram Stoker award, from the Horror Writers Association, so, naturally, I steered clear of it for about two months. I don't want you to misunderstand me; it's not that I didn't want to read this novel, it's that I found myself a bit scared by it - not by it's content, but by what was implied to be lying within it's pages. For me, it was a bit like going into a room where I think there's a spider, but I'm not sure where.

To give a brief summary, the story focuses on a young man, named Shadow, who has been released from prison a few days early because his wife has died in a car crash. Whilst trying to deal with his reinstated freedom and the death of his wife - including the circumstances in which she died - he is pursued, rather ominously, by an older gentleman going by the name of Mr Wednesday, who is determined to hire Shadow as his new errand-boy. Shadow eventually agrees, as it is clear from his first meeting with Mr Wednesday that his enigmatic new boss is a force to be reckoned with. As the novel continues, Shadow is increasingly exposed to a world he has never dreamed of, figures he believed imaginary, and forces that are more powerful than any he has ever known.

As novels go, this is a slow-moving one, though when it comes to climactic scenes, they occur so suddenly, and with such force, that at times I felt almost like I had been punched in the face. Revelations were casually dropped into the text, so casually that a wandering mind might not realise at first what had been said, suddenly notice that the tone had changed, and be forced to backtrack, frantically scanning the pages to find the crucial line, paragraph, speech, word that had caused this shift. You may have guessed already that my mind was prone to wander in this; it certainly was. The trouble I found was that the novel moved so languidly at times that I was thoroughly unprepared for the sucker-punch moments; however, I like to think that Gaiman did this intentionally, because it certainly increased the emotion of the scenes - not only was I privy to those feelings of Shadow, which at times would've been emotional enough, I also had my own feelings to deal with, like the panic I felt when I suddenly realised I may have missed something crucial. This novel taught me to not be complacent.

Shadow, however, was too mysterious for me. I understand that this was intentional; he is, by the very definition of his name, fluid, unknowable, at times there, at times not. He's also an 'everyman' character, deliberately vague and hazy around the edges to allow the reader to project themselves onto him, thus increasing the emotional attachment to events of the novel. However, I was startled by his characterisation; at times he was so silent it was painful, at others he was laugh-out-loud funny - I'm thinking of a conversation he had with a crow as I write this - and at others someone I felt so little sympathy for him that I wasn't particularly fussed about what happened to him next. That's not to say he is an unlikeable character - he really is - but he is unrelatable; we know so little about him that at times I couldn't really get to grips with him as a person, and so consequently couldn't get to grips with the events surrounding him.

I mentioned before that this book gave me the same feeling The Grapes Of Wrath did, and the comparisons I made didn't stop there. It's true, I've read The Grapes Of Wrath recently, and it has stayed with me after finishing - a sign of a good book - but there are many parallels to be drawn (but I don't want to bore you, so I'll only stick with the main ones that have occurred to me). For example, the long-drawn out, descriptive style of writing - Wrath moved very slowly, with sudden moments of action and life that caught me off-guard. Gaiman also adopted the technique of filling in the back story to events and characters through aside-chapters, designed to increase your knowledge of the world and the characters, whilst also drawing you further into the story. Finally, of course, this is a great American novel, dealing with an issue that maybe some modern Americans would like to forget; that the nation is founded on the backs of immigrants, that to start with, this was a country with many religions, borrowed and brought over by those few who hoped to make a new life in the new land, and the age-old question; can different religions, founded on different principles and beliefs, ever get along? This book provided me with an answer, but I imagine someone else reading it would come to a different conclusion.

This is one of those novels where you do have to suspend all rhyme and reason, and just follow the path it takes you; trying to rationalise it would not only ruin the experience, but would also distract you, and you do not want to be distracted. It's a brilliant thing to behold; everything, from Shadow's 'chance' encounters with homeless gods who eke out a living in this modern world - it's both enchanting and upsetting, seeing these fallen gods living our lives - to the sheer banality (at first) of the sleepy town of Lakeside is written beautifully. It's also unpredictable; there's some books where you know, almost from the first page, how it will end, and there's others where you can guess at the general direction the plot is going to take, but American Gods was one where I had absolutely no idea what was going to happen next - every twist, every turn was wonderfully played out, both surprising me, and yet making sense within the overall plot.

However, I must be brutally honest now - I can't say I enjoyed it. I did find it difficult to concentrate, owing to the meandering pace, and the sheer size of the story did, at times, make me feel a bit stupid; I felt like I wasn't quite grasping the purpose of the novel, and this did impact upon my experience of it. It's difficult to feel warmly towards a novel when you feel like you're failing a test, somehow. I would, however, read it again; it's the kind of book you must read more than once, because the first read leaves you a bit startled, like you're not quite sure that what you think you've read is actually what you've read. I didn't enjoy it, but I will read it again, and who knows? Maybe, now I'm a bit more prepared for the story, I'll be more prepared to enjoy it.
Posted by Jasmine to a T